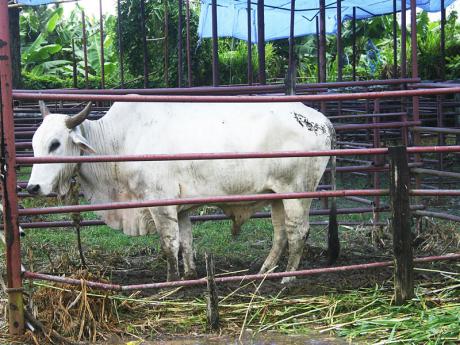 This lone Braham bull was the only animal on display in the livestock section of at the St Mary Agri Expo on Monday, April 9 at the Grey's Inn Sports Complex. This was the second straight year that patrons were disappointed with the poor turnout in the livestock segment.- photo by Christopher Serju

ANNOTTO BAY, St Mary:TREVOR STODDART, chairman of the livestock exhibit committee for the St Mary Agri Expo, was livid about the absence of significant numbers of livestock.

"Last year, we were asked to pay transportation fee of $70,000 which was not in place and this year again," he told The Gleaner at the show. "At the very last minute, after the farm manager gave an assurance on Monday, I was told on Saturday, when I made enquiries, that Hershell Brown, CEO of Agro Invest, said that unless St Mary pays for transportation, then the animals would not be coming."

When The Gleaner spoke with Mr Brown on Wednesday, he denied giving such instructions but defended the stance as in keeping with new thrust by the agriculture ministry.

"I don't remember exactly giving that instruction, but the truth is that we do have financial constraints and what we have been saying is that if organisers need to use the animals in their particular show, then sharing the cost to transport the animals and to do the necessaries is not an unreasonable request," he admitted. The Agro Invest CEO went on to explain that while this was not yet established protocol and because it was still being discussed, it should not have applied to the show.

"I'm really not aware of that one," he said.

Meanwhile, Stoddart wants remedial action taken in an effort to restore participation by exhibitors and interest of patrons to the high of yesteryear.

"At least 90 per cent of patrons coming to the show asked the question, 'Will the big bulls and cows from Minard be there? If not, we are not coming'. So we know the importance of the animals from Minard, so the administration of the St Mary show is very upset and disappointed with the current trend and I hope it does not continue," the veteran livestock judge said.

He explained that because the Bodles Research Station in St Catherine was deemed not up to showcase standard, the failure of Minard to show was particularly disappointing and has made marketing of the show that much harder for organisers.

"The condition of the animals is an indictment, as far as I am concerned, on the Government because the JAS (Jamaica Agricultural Society) is mandated by Government to put on these parish shows. We are expected to present the best quality animals, so the government animals should play the leading role and we are very disappointed in what has taken place and, particularly Minard, which has been with us since 1986. So I am calling on the powers that be to look into the matter."

The show, which had its 26th staging, was in the news last year after the agriculture ministry reversed itself at the last minute on a decision not to support the event.

"We had plans to include areas that we did not get to put through, so as a result, we had to shelve some of these, and pick areas that we could do easily," Stanford Lawes, Rural Agricultural Development Authority manager for St Mary, admitted then while insisting that the presentation was still up to standard.