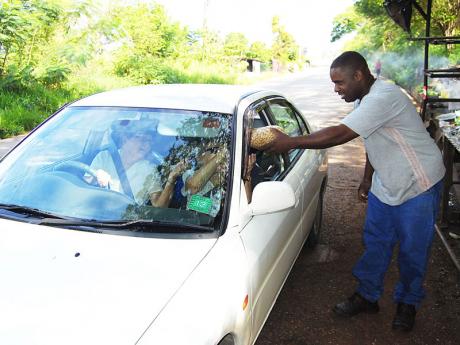 Two elderly ladies buy peanuts for their parrots from Powell 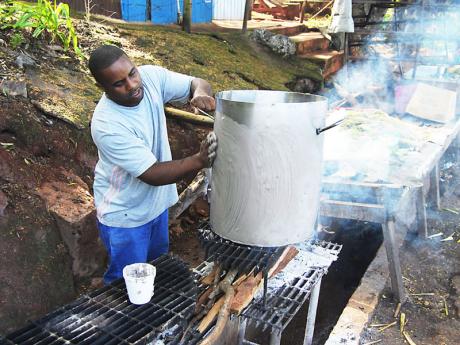 Powell rubs ashes on the soup pot to make it easier for it to be washed after using it on the wood fire.- photos bY Dave Lindo 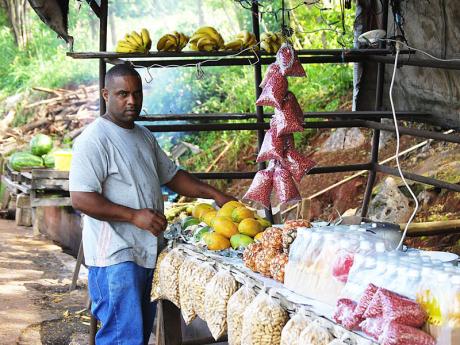 Powell puts his stall together for the day's sale.
1
2
3

SPUR TREE, Manchester:DRIVING DOWN Spur Tree hill, approaching the foot of the descent, a scene that catches the eyes is a vendor with his delicious Corn and Corn soup ready to be devoured.

That 'Corn Man' is Oral Powell who has made a living for himself from that same stall, providing his many customers with sumptuous treats on their journeys. Powell is from Eglington, a community along Spur Tree hill.

Explaining how he got started in his business he said, "I used to do farming and plant things like watermelon and market it. After a time, I did some thinking and saw where St Elizabeth has a lot of corn and I know that people, especially when they are travelling, love corn. So I started to sell boiled corn and make corn soup right here and it was an instant hit."

Powell gradually expanded his business and added things such as raw peanuts, peanut porridge, as well as watermelon, jelly coconut, pineapple and ripe bananas as a part of his product offering.

"The corn sell fastest, the corn soup has no meat; I use only corn, peanut and vegetables to make it," Powell explained. "People are more health conscious these days, so they love that (corn soup). The peanut porridge is also a favourite of my customers."

Powell sells raw peanut from the shell and the ones that are stripped."People with parrots buy the peanut in shell a lot, the parrots love it, while you have people who eat both the stripped and shell ones same way," he said.

At Easter, Powell normally gets good sales for his corns, "People eat a lot of corn that time and it is normally plentiful; you get a lot of corn from November to April," he added.

He gets most of his goods from farmers in St Elizabeth, because they are nearby.

Weekends are the busiest time of the week for Powell. "You have a lot of persons travelling from Kingston to the country on weekends and they will stop when they are passing by, Powell disclosed. "On weekends and public holidays, you have people going to the beach who will stop as well," he added.

There are also special occasions such as the annual Rebel Salute concert in January, among others. "I always stock up for Rebel Salute because you will have a lot of persons stopping on their way back from the show," Powell related. "Many artistes stop here all the time, including Tony Rebel, Tarrus Riley and others. I am happy for this business because from it I can take care of my family," he added.