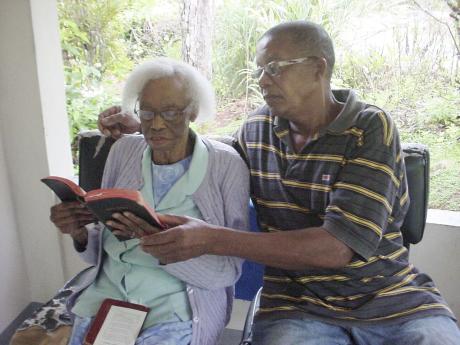 Hilda May Cross reads the Bible to her son Leebert.- PHOTOS BY GEORGE HENRY 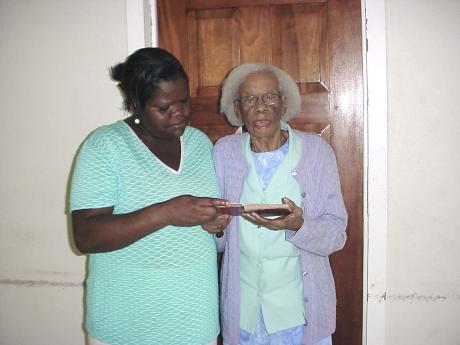 Hilda May Cross sings one of her favourite hymns to her caregiver Sharon Allen.
1
2

SANGUINETTI, Clarendon:AT AGE 95, one would expect an individual to have sight and other health problems. But not so for Clarendon resident Hilda May Cross of Sanguinetti in the parish. The nonagenarian still reads her Bible and other fine prints well and without difficulty.

Cross reads fluently and with clarity, as words from articles and the Bible can be heard by anyone who wishes to listen; even those who have reading difficulties can learn a few things from the former early-childhood teacher.

Cross, who grew up in the Anglican Church in Sanguinetti where she has been living from birth, and who is still a member of that congregation, loves to sing and still does so melodiously, as she entertains those who visit her from time to time, with her soprano and, at times, her alto. She however, told The Gleaner that she enjoys singing soprano.

Still blessed with eyes like that of an eagle, but who has a slight hearing difficulty, the nonagenarian sang lustily when The Gleaner visited her home recently while she had as company her son Leebert Cross and her caregiver Sharon Allen.

God has kept her

The mother of six - one daughter and five sons - said she loves the Lord with all her heart; and that her longevity must be attributed to the mercy of God who has seen it fit to allow her to be around for so long.

The former schoolteacher, who said she was the first teacher at the first private school in her community decades ago, and who has a very good memory, said she taught for five years before she took up dressmaking full-time, while designing dresses for women from all walks of life. She said she loved her work and took pride in doing it.

Apart from her six biological children, Cross also saw to the care and love of scores of other children, and cared for them like her own, with the help of her late husband Egbert who died in 1981.

Cross, who will celebrate her 96th birthday on December 20, enjoys entertaining people with some of her favourite hymns.

She still likes to eat all the food she grew up eating; and has no difficulty consuming yellow, sweet and St Vincent yams; vegetables, especially green leafy vegetables, and her favourite protein - sea fish, which she said she loves with a passion.

Cross said Jamaica has seen better days. She noted that during her younger years, she knew nothing about people shooting others.

Cross noted that during her time at school, persons were not as privileged to access a good education; and in comparison to today, things are much better; but her only disappointment is that too many young people are not taking advantage of the opportunities available to them as far as the acquisition of education is concerned.

She wants Jamaica to be better; but would like all of us to come together and live more loving with each other, in an effort to get rid of the monster of crime in the society. Cross also wants Jamaicans who can help the less fortunate in the society, to do so, so that the country can be a better place to live, especially for the elderly.