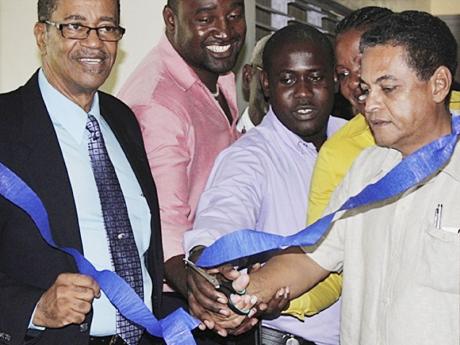 The result of the joint effort is the opening of the Brown's Town Community Resource Centre, last week, thanks to funding amounting to $4.45 million by the UAF.

The resource centre is one of the projects initiated by the CDC and the SDC in consultation with community members to address the issue of unemployment in Brown's Town and will serve to empower the community by facilitating opportunities for its residents to access information and also to learn a soft skill and to develop personally.

"It has been provided in response to the expressed needs of the public," SDC St Ann Parish Manager Richardo Aiken, told The Gleaner.

Aiken said the resource centre would be one of the vehicles to mitigate against challenges faced by residents, such as unemployment, arguing that persons would be able to become more aware of job openings by using the Internet.

Participants will also be taught how to use the computer, making them employable. Already, volunteers have started assisting community members with résumé writing as they go in search of jobs. Workshops will be held later to instruct persons how to properly write résumés and proposals.

Aiken also said that the centre is to partner with HEART Trust/National Training Agency to have persons trained and certified with classes set to begin in the second week of May.

In hailing the resource centre, Local Government Minister Noel Arscott commended the work of the SDC and said it has a critical role to play in helping to develop communities effectively.

He said access to information especially for the Brown's Town community is a critical element of community development as residents need to be abreast of global issues.

"The Brown's Town Community Resource Centre will be a vital centrepiece for dealing with issues identified in the community," Arscott said.

Meanwhile, managing director of UAF, Hugh Cross, said he was pleased that his company was able to fund a project that would give residents in the community access to information. He said the project would bridge the information gap and give Internet access to everyone.

He said UAF will pay for free Internet access for two years so that residents will enjoy what the facility has to offer.

Pauline Tomlinson, CDC member and a resident of Brown's Town, said she was elated that the resource centre will equip community members with skills and opportunities that contribute to their growth and development as individuals.