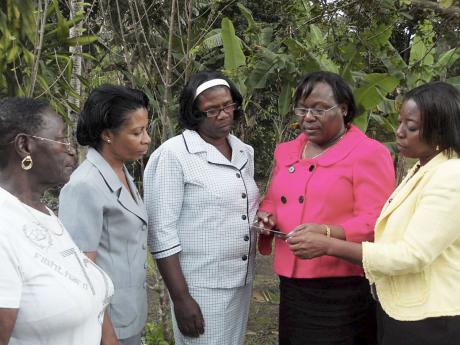 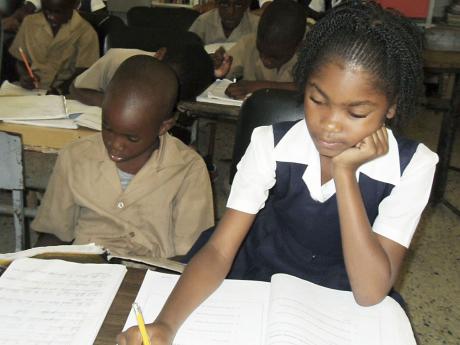 Seven-year-old Jon-Bonet Prendergast (right) and her classmate in a pensive mood. Jon-Benet is one of the grade-two students taught by Paula Gordon at Sergeantville Primary school in Harkers Hall, St Catherine.- PHOTOS BY KAREN SUDU
1
2

HARKERS HALL, St Catherine:"I FEEL sad because she is dead and I love her so much, because she was a nice kind person," Jon-Bonet Prendergast, a grade-two student at Sergeantville Primary School in Harkers Hall, St Catherine, told The Gleaner when our news team visited the school on Tuesday.

The dejected seven-year-old was talking about her teacher, Paula Gordon, who was brutally murdered on April 8 at her home in Bamboo Corner, Zion Hill, north central St Catherine.

Her body was reportedly found after a resolute search by family and community members who traced a blood trail, which led them to a river some 50 metres from her home.

But the death of the 36-year-old graduate of Shortwood Teachers' College not only saddened Jon-Bonet, but an entire class and school population.

So, the Ministry of Education Region Six under the leadership of Dr Claudette Clarke initiated ongoing grief counselling sessions for the students and staff. And, a team of principals led by Viviene Stewart, territorial education officer visited the institution on Tuesday.

"A key element of the ministry's strategic objective is a school and community collaboration, so we have seen that in motion, since school has resumed (from the Easter break) we have ministers of religion from the community who have been coming in at different points to offer grief counselling and to shore up support for students and staff," Stewart shared with The Gleaner.

For Stewart, Gordon, the holder of a bachelor's degree in guidance and counselling from the International University College, was a true stalwart who was committed to the development of the profession.

"Whenever we had workshops or evaluations or any such seminars, she helped the process so much that it would be better for the next year, her death is a loss for the school, for the region and Jamaica," she added.

Gordon is a past student of St Mary's All-Age School in Above Rocks, where principal Doreen Rowe was her grade three teacher.

"Paula's personality has not changed over the years. She was one vibrant student, asked many questions, always wanted to know something more, she would offer information just like that, she had a good heart," she reflected.

"It was the Wednesday before (her death) her principal and I sat in my office and we were chatting about how she engages her students in drama. When she was doing reading, she would put herself as the characters," said Geddes-Nelson.

Principal, Sergeantville Primary, Delphena Simpson who has been a member of the teaching profession for more than 22 years, serving as principal since last September said Gordon's passing has left a void.

"It has affected us deeply," she told The Gleaner. "She was a fun-loving, full of life person who participated in all the activities at school."

Simpson said Gordon, who also taught at Grateful Hill Primary in Zion Hill for approximately seven years, prior to her sojourn at Sergeantville in September 2009, initiated the first carol service held at the latter institution.

Inevitably, family members are still trying to come to terms with her horrific and untimely death. A teary-eyed Eulyn Hinds, her older half sister of Zion Hill, said she admired her sister's drive to uplift herself.