John Mills make it 18 in a row 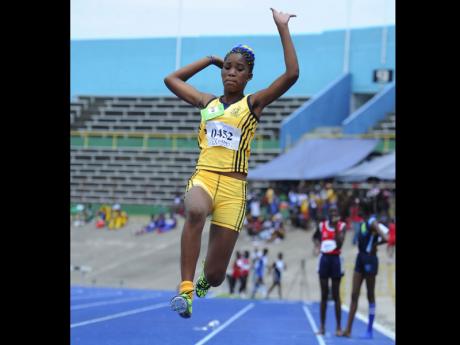 Ginelle Grant of John Mills winning the girls' Class Two long jump with a leap of 4.56 metres at the Hi-Lyte-sponsored Institute of Sports All-age and Junior High Schools Track and Field Championsips at the National Stadium on Thursday.- Ricardo Makyn/Staff Photographer

John Mills' coach, Ransford Spaulding, was happy but not surprised by his team's accomplishment.

"I am overwhelmed because this is a milestone achievement for the school," said Spaulding.

"I would like people to recognise this victory at national level because this is the 18th consecutive victory for John Mills under my stewardship, and no other coach in Jamaica has achieved anything like this before," he said.

Spaulding added: "I had predicted this from way back in November. This huge win was expected."

The many-time champions, who came into the final day with a 28.5-point lead, set the tone from the very first event when Kristoff Darby won the Class Two boys' 800m with a record-breaking run of 2:09.81, eclipsing the previous time of 2:11.0, which was set back in 1993 by Abraham Dawn of Shortwood.

Shane Buchanan of Calabar Junior High was second in 2:11.62, followed by Michael Palmer of Louise Bennett-Coverley (2:18.72).

Jevaughn Taylor of Cockburn Gardens won the boys' Class Three long jump with a leap of 5.72m in front of Paketo Dudley of Mico (5.23m) and Tavar Slowly of John Mills (4.90m).