It'll be a 'Blast' in King's Plate 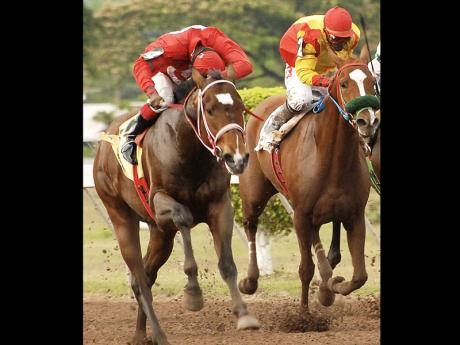 BLAST THEM AWAY (left), with Dane Nelson aboard, getting the better of RIGHT MARKER (centre), who placed third with Paul 'Country' Francis aboard, in 'The Alsafra 2008' 3-y-o & Up Open Allowance event over 1200 metres at Caymanas Park on Saturday, April 7.- File

Today's seventh running of the 3-y-o and up open allowance feature for the King's Plate over 1500 metres at Caymanas Park should provide the unbeaten American 3-y-o colt BLAST THEM AWAY with victory No.7.

Conditioned by champion trainer Wayne DaCosta, BLAST THEM AWAY, with leading jockey Dane Nelson again in the saddle, faces what amounts to his sternest test under topweight of 57.0kg in a tough-looking contest.

He has won his two races this season in such convincing fashion that he should use this as a stepping stone to grade-one company.

After winning the Sweet Ruckus Trophy over 1400 metres for two-year-olds on December 31 in fast time (1:25.2), to be voted the champion two-year-old of last season, BLAST THEM AWAY proceeded to win the Ash Wednesday Trophy over 1300 metres in the good time of 1:18.3 in overnight company on February 22. Last time out on April 7, he was equally impressive over the same distance in open allowance company, leading home TREND SETTER and RIGHT MARKER by 31/4 lengths.

Although up appreciably in the scales and will be renewing rivalry with the talented native-bred filly RIGHT MARKER and the DaCosta-trained American four-year-old gelding RIO COBRE on far worse terms at the weights, BLAST THEM AWAY definitely has a touch of class and ought to be followed until his colours are lowered.

Having secured a favourable draw at post position nine, I am expecting him to stalk the expected leaders RIO COBRE and the well-prepared and lightly-weighted American colt REASONABLE PRESS (under champion jockey Dick Cardenas) into the straight before coming through approaching the distance for yet another win.

The Philip Feanny-trained REASONABLE PRESS, RIGHT MARKER from the Noel Ennevor stables and the Gary Subratie-trained American filly SARAH BARRACUDA (seeks hat-trick) should have a battle royal for the bottom leg of the exacta.

SARAH BARRACUDA, under champion jockey Omar Walker, looks the one most likely to secure second.

Other firm fancies on the well-supported programme which commences at 12:35 p.m. are LADY MACBETH (much improved) to stave off fellow American JAH LOVE in the first race over 1820 metres; the fleet-footed MR. SKILL to make all, as usual, in the second over the round-five course; PRIESTKING in the fourth for maiden three-year-olds; PERSIAN GOLD to stave off IMPERIAL FORTUNE in the sixth; and down-in-class SOCA PARTY in the eighth for $180,000 claimers.