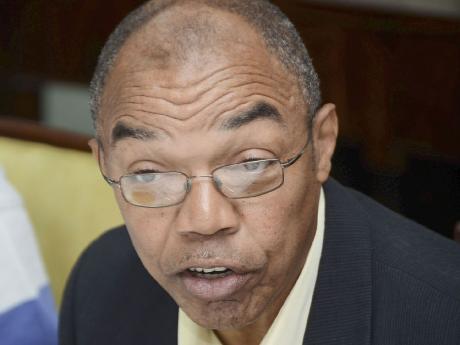 ... calls for study into whether athletes are being overworked

Jamaica Athletics Administrative Association (JAAA) president Dr Warren Blake is not overly concerned by the perceived threat being posed to Jamaica's regional sprinting dominance by The Bahamas and called for a study into whether or not local junior athletes are being overworked by their coaches.

The Jamaicans failed to win a single 200m at the recently concluded Carifta Games in Bermuda and won two of the four 100m and 4x100m finals and a 400m final. The Bahamas, on the other hand, walked away with top honours in two 100m and 4x100m relays, one 200m and three 400m finals.

However, Blake seemed assured in the country's sprinting programme and pointed out that while other regional territories rely on athletes from the collegiate level for the Carifta Games, Jamaica's team is made up entirely of high-school students.

"I don't see the Bahamians as a threat," said Blake, while speaking at a recent Gleaner Editors' Forum, which was held to mark the 100-day countdown to the Olympic Games. "In Carifta, unlike the other teams in the region, we must remember that we do not use our collegiate-level athletes."

"Also, this year some of our top performers in the sprints did not go because of injury and a lot of the coaches withhold their top charges from Carifta trials because they are saving them for Champs," said Blake.

"In the end, they have to answer to the schools and the old students' networks that support the schools about their Champs performances, so they make the decision whether or not they are going to send their athletes to Carifta trials and run the risk of injury and deprive them of champs," he added while dismissing the possibility of an amendment to the selection process to accommodate the top two finishers at the ISSA/GraceKennedy Boys and Girls' Championships as automatic qualifiers.

"The JAAA in recent years has established the rule that if you don't come to Carifta trials, you are not eligible for selection to the team no matter what your performance at Champs is, they (athletes) must come to the trials," Blake underlined.