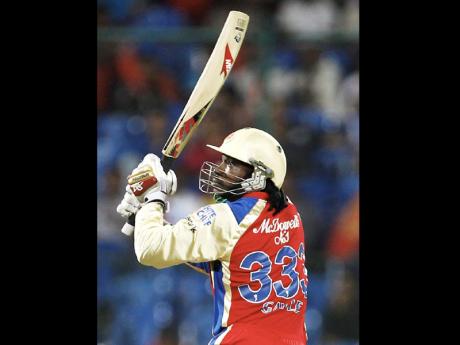 MOHALI, India (CMC):Big-hitting Chris Gayle unveiled another high-powered innings yesterday to haul his Royal Challengers Bangalore (RCB) out of trouble and propel them to a convincing five-wicket win over Kings XI Punjab in the Indian Premier League.

The left-hander carved out a scintillating 87 from a mere 56 balls as Royal Challengers overhauled Kings XI's 163 for six with three balls to spare at the Punjab Cricket Association Stadium.

Royal Challengers slipped to 25 for three in the sixth over but Gayle rose to the occasion for the second successive match, belting eight fours and four sixes in another quality exhibition.

He dominated a fourth-wicket stand of 131 with South African stroke-maker AB de Villiers (52), a partnership that put Royal Challengers in sight of victory.

Gayle made a measured start with his first 30 runs requiring 28 deliveries and his half-century needing 41.

However, he accelerated thereafter, and in tandem with de Villiers, who hit six fours off 39 balls, took the fight to Kings XI.

Gayle was eventually out, brilliantly caught at cover by David Hussey in the 28th over as he opened up for another slash through the off side. He had already taken 14 runs from the first three balls.

Earlier, Hussey top-scored with 41 after Kings XI were put in.