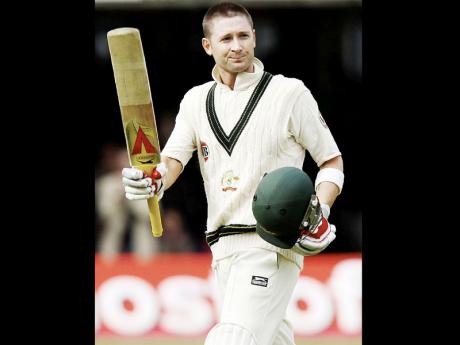 PORT-OF-SPAIN, Trinidad (CMC):Australia captain Michael Clarke admitted Thursday he was slightly worried about losing the second Test against West Indies, especially after the way his opposite number Darren Sammy set about the run chase.

Sammy was unbeaten on a cameo 30 from 26 balls when persistent rain ended the Windies' pursuit of 215 for victory and forced a draw at Queen's Park Oval here.

West Indies were 53 for two when the game was called off.

However, Clarke said he believed once spinners Nathan Lyon and Michael Beer had entered the attack, Australia would have bowled West Indies out.

"The facts are that we still could have lost ... that's for sure, the way Darren was batting," Clarke told reporters.

"The West Indies have a pretty strong batting line-up with (Shiv) Chanderpaul in good form. But I was confident with the way the boys bowled in the first innings. I was confident the two spinners could have spun us to victory."

Leading by 54 on first innings, Australia declared their second innings on 160 for eight after resuming the final day on Thursday on 73 for three.

West Indies then picked up the challenge and despite losing openers Kieran Powell and Adrian Barath cheaply to slip to 13 for two in the fourth over, Sammy clubbed four fours and a six to up the tempo.

While Beer shared the new ball, Lyon did not get in a single over before the rains came but Clarke said the off-spinner would have been the trump card.

"He wasn't far away. He was going to bowl that over [before the rain break] and I imagine for us to have won the game, he would have bowled the whole way through."

The third and final Test bowls off in Dominica next Monday.