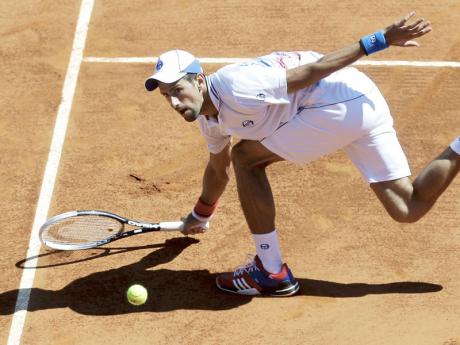 Novak Djokovic of Serbia plays a return shot to Robin Haase of Netherlands during their quarter-final match of the Monte Carlo Tennis Masters tournament in Monaco yesterday. Djokovic won 6-4, 6-2.- AP

MONACO (AP):Novak Djokovic dropped serve four times before beating Robin Haase 6-4, 6-2 to reach the Monte Carlo Masters semi-finals yesterday, saying he had thought about pulling out of the event following his grandfather's death.

Playing the day after his grandfather died, the top-ranked Djokovic looked distracted at times against Haase. He missed a first chance to serve out for the match at 5-1 before breaking the unseeded Dutchman for the seventh time to seal victory.

The win kept Djokovic on course for a final against seven-time defending champion Rafael Nadal, who overcame a slight blip in the first set before beating Stanislas Wawrinka 7-5, 6-4 for his 40th straight win at Monte Carlo.

Djokovic had considered withdrawing before his third-round match on Thursday, which came only a few hours after he'd received the bad news.

"Yeah, I did. But I'm a professional and life goes on,'' he said. "I know that I cannot change anything now. Obviously, it's what life gives you and takes (from) you. It's a normal circle of life. I was very close to him, so it was a big loss for me.

"Anytime is the wrong time to receive that news. Today was a bit better, but still a lot of emotional ups and downs throughout the match. I got to the semifinals, which is big result for me under the circumstances."

Because of his tennis commitments, Djokovic will be unable to make the funeral back home in Serbia.

"No, it's not possible. It's a very sensitive thing to talk about really," he said. "Every religion has a different way of proceeding, the funerals, life itself."

Djokovic lost a total of 16 points on his usually rock-solid first serve, and his play was sometimes erratic.

Djokovic next plays sixth-seeded Tomas Berdych, who took advantage of a wayward performance from Andy Murray to win 6-7 (4), 6-2, 6-3.

"He's a threat to anybody on any surface. Big groundstrokes, powerful serve," said Djokovic, who is 8-1 overall against Berdych but has never played him on clay. "He knows what it feels like to play on the big stage. He had a great match against Andy today."

Nadal followed Djokovic on to the court, broke Wawrinka immediately and then opened up a 3-1 lead.