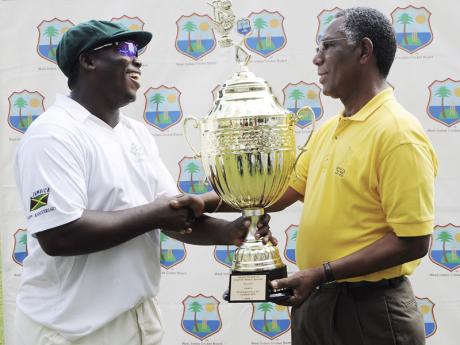 Tamar Lambert (left), captain of the Jamaica cricket team, shakes hands with Jamaica Cricket Association president, Lyndel Wright, after he was presented with the George Headley/Sir Everton Weekes Trophy for the historic fifth consecutive triumph in the West Indies Cricket Board Regional Four-Day Tournament. Jamaica beat Barbados by 139 runs in the final, which ended at Sabina Park on Monday.- Ricardo Makyn/Staff Photographer

"It should give us a lot of lift and we hope that this will even encourage corporate sponsors to come on board and support our programmes and players in all areas," said Wright, shortly after Jamaica's 139-run victory over Barbados in the final on Monday at Sabina Park.

"We thus call on corporate Jamaica and, of course, the Government to come out and assist us as we need the help if we are to continue our dominance at the various levels of the game."

The JCA, which had a change in leadership last May, saw Wright taking over from businessman Paul Campbell.

However, as was the case during Campbell's tenure, the association, despite several attempts, has failed to attract sponsors for a number of its programmes, teams and competitions.

This, according to Wright, is affecting the optimum growth and development of the game, and should it be allowed to continue, could affect performances of future national teams.

The premier national two-day Senior Cup, which is slated to start on April 28, has been without a sponsor since 2007.

Jamaica are the reigning regional senior four-day and Super50, women's, Under-19 knockout, Under-15 and blind cricket champions.

Meanwhile, Wright, who is in the first year of a two-year reign, praised the efforts of the players and the coaching and management for their resilience in helping Jamaica claim a record fifth straight hold on the title.

"This was a victory for our country as it celebrates its 50th anniversary," he said.

"This is an unprecedented (the record fifth-straight title) and I must say how proud I am of the players and the management team, including coach Junior Bennett and trainer David Bernard Sr."

He added: "I thought that what brought us through was the resilience, application and good leadership.

"I think Tamar Lambert was very, very good in terms of how astute a leader he is, which allowed the team to play in a unified manner, remain focused on their way to the record and the victory," Wright said.