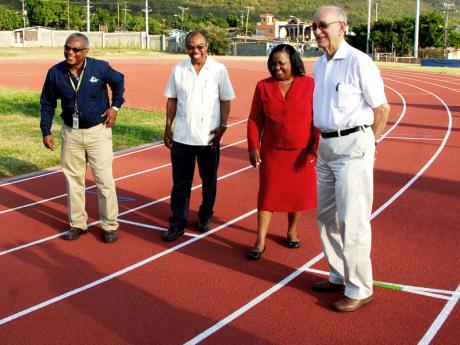 The 2012 Business House cricket season is scheduled to start on Sunday, April 29, with 11 teams participating.

Lack of sponsorship has forced the Business House Cricket Board to drop the 35-over competition this time around, but the season will mark the return of the Hermon Spoerri double-wicket competition.

The Business House Cricket Board will mark its 75th season this year. Jamaica Broilers, through its Reggae Jammin Foods and Best Dressed Chicken brands, are sole sponsors of the competition.

Following Thursday's launch, the Wray & Nephew Business House domino competition - both divisions one and two - will commence on Friday, May 4 with 20 teams.

The competition will once again come under the umbrella of the National Association of Domino bodies. Vice-president Humbert Davis disclosed that four new teams will play in Division II.

Downs were beaten 1-4 by Meadows in the final round, while Monymusk lost at home 3-2 to Bodles. De la Vega ended the competition with a creditable 2-2 draw with the league's runaway train, Rivoli United, but had no chance of escaping the drop. Their fate was sealed off the field of play by two decisions of the Competition's Committee, which awarded full points to two of their prior opponents.

Naggo Head found themselves on the drop list after they were beaten 0-2 at home by Spartan of Clarendon. The result saved Spartan from certain relegation. Both ended on 18 points, but Spartan have a lower deficit goal differential.

Hillstars made a huge push towards nabbing the final available semi-final spot in the Captain's Bakery & Grill-sponsored Manchester Major League after slamming Comfort 6-0 on Wednesday at Kirkvine.

The result was extremely remarkable since Comfort entered the match requiring just a draw to seal the fourth semi-final spot behind Mile Gully, Kendal and Porus.

However, Comfort seemed hurt by the mid-week fixture as a number of their key players, including their goalkeeper, did not turn up for the game.

Comfort completed their preliminary fixture on 21 points and will now hope that Hillstars falter in their remaining encounter against Georges Valley. It was the second straight setback for Comfort, who could have sealed their spot last Sunday with a win against Porus, but drew 2-2 instead.

Hillstars are now on 18 points and with a much better goal difference than Comfort, will just need to defeat Georges Valley and make a semi-final cast which had looked most unlikely two rounds ago.

Meanwhile Mile Gully finished as the top team after the preliminary round on 35 points, after Ashani Lawrence's hat-trick pivoted them to a 4-0 win over Cobbla/Gully Strikers. For this achievement, they have now qualified for a monetary bonus, regardless of their fortunes in the semi-final round.

Jamalco lost ground after they were stunned 1-0 by York Town in the previous round, and held unto the top spot by virtue of better goal difference. However, Four Path took full advantage of hosting second from bottom Longwood, smashing them 6-0 last week Saturday. Darren Wallace and Kevroy Webb scored twice, while there was one each from Marvin Morgan and Gary Williams.

New Bowens' 2-1 win over Woodhall has since pivoted them into second on 34 points, pushing Jamalco into third on 33 points.

More drama could unfold when Jamalco host Four Paths in the key 16th round game tomorrow at Wembley. Jamalco would need to win by two clear goals to retake leadership on goal difference. The first round game between the two ended in a 2-2 draw.

A lack of sponsorship has forced the Clarendon Football Association to merge both the parish's traditional Division One and Division Two competitions.

A new season of of the merged leagues got under way last week Saturday. Thirty-two teams organised in four zones will be vying for honours in this revamped competition.

Action kicked off in Zone One where Ian Palmer scored the first goal of the season, in Cock Pit's 1-0 win over Salt River. They day's programme ended similarly with Callino Henry scoring in the 65th minute to give Mineral Heights a 1-0 win over Savannah Cross.

On Monday in Zone Two, Summerfield recorded a 3-0 win over White Marl, while in Zone Three the following day, Treadlight defeated New Longsville 3-1, while Bucknor and Bushy Park ended 1-1.

On Wednesday in Zone Four, L won 2-0 away to Hypermistic, while Ebony Stars easily dispatched the Belle Plains and Swansea merged teams 4-1.

A number of the drawing cards, including the club's top shooter and president, Orville Henriques, are part of the Jamaican contingent in Florida competing at the Area Six State Championships, but are expected in the island later today.

There is an admission fee of $1,000 dollars for competitors and members of the public. Competition starts at 11:a.m.

Colours' destiny in own hands

Colours Sports Club need to win their final preliminary round match against Spring Village at the Port Henderson Plaza to snatch the eighth and final quarter-final spot in the Impulse-sponsored Portmore/St Catherine Domino League match tomorrow.

Colours are currently ninth on 47 points and a win would see them leapfrog Eradication (50 points). Eradication looked as if they were serious challengers for the crown at the mid-way stage, but tapered off as the tournament progressed. Eradication's preliminary fixture has ended.

Most of the quarter-final spots across the four preliminary zones in the Power Services-sponsored Manchester Division Two have been decided.

Grey Ground and Royal Flat will emerge from Zone D with one match to play. Grey Ground are unbeaten, amassing 10 points from three wins and a draw, while Royal Flat's seven points from four games are unassailable for second place. The two will meet in the zone's final encounter slated for the Comfort community playing field next Tuesday.

The four other teams have completed their fixtures with Clandon Strikers in with a remote chance having to win by 14 clear goals in the event of a Royal Flat loss.

Preliminary matches are over in Zone B with Alligator Pond finishing on top with nine points from four games, and Plouden on seven.

Zone C qualifiers are Allied Youth Club with eight points from four games and Hasty Good six points. The latter can however top the zone providing they win against Mike Town next Tuesday in a contest scheduled for the Mile Gully playing field.

Only Zone A's qualifiers are not determined. They will come from the trio of Cedar Grove, who have completed their fixtures with eight points from four games; Greenvale, who have seven points from three; and May Day, with five from three. The match-up on Tuesday between Greenvale and May Day at the Victor Dixon High school ground will likely decide the qualifiers.

Hellshire United, the knockout kings, will tomorrow have their spirits high when they take on arch-rivals Westchester in the final of the LIME Portmore Division Two Football League at the Passagefort field, match time is 3 p.m. Westchester, the mid-season champs, have the edge in head-to-head confrontations with Hellshire as they won their first meeting 2-0, while the second match ended in a draw.

Hellshire got past East Portmore Portals 2-1 on aggregate in their semi-final encounter, while Westchester defeated Westport 3-1 on aggregate. Hellshire will depend heavily on strikers Rohan Grant and Rohan Cato for goals, while, Westchester's main hopes lie with their two goal poachers, Lusheng Davis and Orlando Bryan.

In the second game at the venue, Carlyle Goodwin scored a double (30th, 57th) and Shawn Thompson scored in stoppage time (62nd), as Independence City defeated Waterford 3-0. The competition continues on Monday.

The second set of semi-final games will be played at the same venue this afternoon. Flamingo will take a 2-1 lead over Albion in their Division one game at 3 p.m., while, at 5 p.m., Rodwood will try and break their 1-1 deadlock with DB Basovak.

The final for both leagues is slated to be played at the Prison Oval on Saturday, April 28.

Two semis spots up for grabs in St Elizabeth

The penultimate round of preliminary matches in the Wray & Nephew sponsored St Elizabeth Major League will be played this weekend, with two semi-final spots are still up for grabs.

Tafari Lions can confirm a spot with a draw against Parrottee whom they host today in Lacovia. Newell will need victory against out of contention Burnt Ground at Hounslow tomorrow to keep their hopes alive.

No matches were played last weekend, as the league was suspended to facilitate the payment of all outstanding referee fees.

Rojorne Richards scored a 19th minute goal for Old England to upstage defending champions Studds 1-0 in the latest match in the Manchester Under 17 competition, sponsored by Power Services Company Limited.

The result leaves Old England and Flava United on four points each in Zone A. Studds stay third on three points. Georges Valley, the leaders in Zone B, recorded their second straight win, edging Mandeville United 1-0.

Persistent rain as well as a number of rescheduled matches in the parish's Major League have stalled progress across most of the four zones. After a month of competition, most teams have only played two games.

Only four teams - Hillstars and Mile Gully FC in Zone D and Georges Valley and Mile Gully Youth in Zone B - have maximum points after two matches. Twenty two teams, inclusive of schools, are participating.