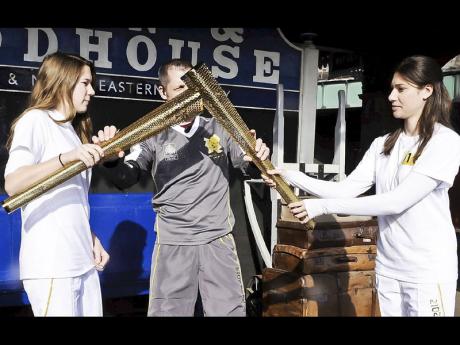 LONDON (AP):Make way for the torch. But the flame will come later.

"This really is the beginning of the Games," said Paul Deighton, the chief executive of the organising committee. "We want to get this right."

Some 122 volunteers were running with the torch yesterday, but it wasn't lit. The flame comes when the actual torch relay starts from Land's End - the westernmost tip of England - next month.

The flame will arrive from Greece on May 18 and kick off an 8,000-mile (12,875-kilometre) relay across the UK the following day. The flame also makes stops in Ireland and involve 8,000 torchbearers.

Authorities are not expecting huge human-rights protests like those that marred the torch relay for the 2008 Beijing Olympics. But police fear that individuals seeking attention will try to disrupt the 70-day relay that ends July 27 with the opening ceremony at London's Olympic Stadium.

After Beijing, the International Olympic Committee ruled that torch relays should be confined to host countries - although it did make an exception this time so the flame could travel to Ireland.

Fears of protests were heightened earlier this month when the annual Boat Race between English universities Oxford and Cambridge was marred by an intruder protesting against elitism and privilege. The demonstrator jumped into the Thames River, bringing both boats to a standstill just over halfway through the 41/4-mile (6.8-kilometre) race. He narrowly avoided being struck by oars from both crews.

Organisers urged such lone wolf demonstrators to take their causes elsewhere, particularly since the torchbearers will not, by and large, be national figures. Most were chosen because of their good works in their hometowns.

"The torch is all about the local communities," Deighton said. "It's about ordinary people. I think it would be absolutely terrible to ruin the moment for these people."

The torchbearers for the actual relay include Britain's oldest full-time firefighter and a soldier who lost three limbs in an explosion in Afghanistan.