Chance for Richards to take off 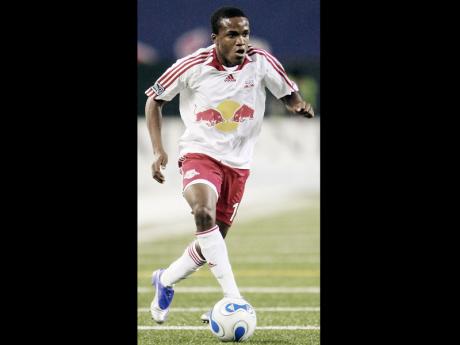 New York Red Bulls' Dane Richards will want to build on his breakthrough game of 2012, when the speedy attacker accompanies Jamaica's contingent into Major League Soccer (MLS) action this weekend.

Richards, still goalless after six MLS games, got on the scoresheet in another fashion by supplying his first assist in New York's 2-2 draw with San José Earthquakes last weekend.

Left fullback Shaun Francis could find his playing time under scrutiny. His Columbus Crew lost 1-0 to Philadelphia Union last weekend. Francis, who played all of the season's first five games, was substituted in the 73rd minute against Philadelphia as Columbus, now sixth in the EC, sought late game attacking punch.

Today, Columbus host Houston Dynamo, whose Reggae Boyz Jermaine Taylor and Je-Vaughn Watson have helped to 2-1-1 and fourth in the EC. Houston drew 1-1 with Chicago Fire on Sunday in a game Taylor and Watson started, but was cut short in the second half due to inclement weather. Taylor, selected to bolster injury-plagued Houston, earned his head coach's praise.

"The back four was pretty strong with Jermaine adding to the backline like he has before," Dominic Kinnear told MLS.com.

Need to Break from slump

Johnson came close to adding to his single MLS goal in 2012 as two efforts by the national striker were cleared off the goal line. TFC, outscored 10 goals to two and last in the EC, host Chicago today.

Fraser and Chivas, with impressive Jamaica-connected midfielder Ryan Smith and aiming for their third straight win, host Philadelphia today. Chivas are 3-3 and fifth in the WC.

Montreal Impact's defence, led by national players Donovan Ricketts and Shavar Thomas, was again breached late in the team's two most recent games, leaving the club eighth in the EC with a 1-5-2 record.

Goalkeeper Ricketts made crucial saves last weekend, but conceded a long-range shot in the 77th minute that tied the score, and was also beaten in the 88th minute as FC Dallas won 2-1. Ricketts was again beaten in a 1-1 draw with DC United on Wednesday. Montreal get a bye this weekend.

Meanwhile, it is still not clear when injured Jamaican rookie Darren Mattocks will play for slumping Vancouver Whitecaps, who lost 3-1 to Sporting Kansas City on Wednesday to drop to 2-2-2, seventh in the WC. They face FC Dallas today.