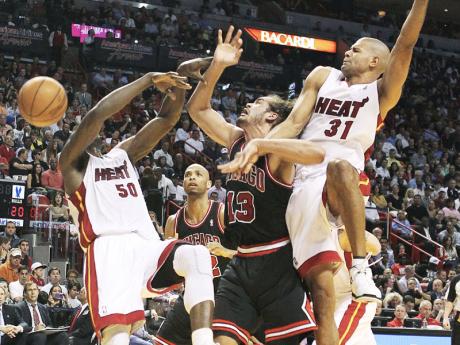 Chicago Bulls' Joakim Noah is fouled by Miami Heat's Joel Anthony (left) and Shane Battier during the first quarter of an NBA basketball game on Thursday night in Miami.- AP

MIAMI (AP):The earliest Miami and Chicago could meet again is Game 1 of the Eastern Conference finals.

Good thing. The tempers could use a little time to cool down. And after a game filled with shoves and takedowns, the race for the No. 1 seed in the East is still going strong.

LeBron James had 27 points and 11 rebounds, Dwyane Wade scored 18 points and Miami tightened up the race in the East by beating the Bulls 83-72 on Thursday night in a scuffle-filled win that pulled the Heat within 11/2 games of Chicago in the conference standings.

Mario Chalmers scored 16 points and Udonis Haslem grabbed 10 rebounds for Miami, who held the Bulls to a season-low point total. The Bulls had been 23-0 this season when holding teams to 86 points or less.

John Lucas scored 16 points for Chicago, who were again without reigning MVP Derrick Rose because of injuries. Joakim Noah had 15 points and 10 rebounds, Luol Deng added 11 points and Carlos Boozer had 10 for the Bulls, who split four games with Miami this season and could have clinched the top spot in the East with a win on Thursday.

"We wanted it bad, but they wanted it more," Noah said. "That can't happen."

Chicago (47-16) have games with Dallas, Indiana and Cleveland left, while Miami (45-17) still have matchups with Washington (twice), Houston and Boston.

Miami won despite playing without Chris Bosh, sidelined for the second straight night to rest minor bumps and bruises.

"This season's been a long, short year," Wade said. "But this is the time of the year we all love and enjoy."

In case anyone forgot that the Heat and Bulls don't particularly care for one another, the refresher courses came often in this one.

The first real salvo came with 6:05 left in the first half, when Jones was ejected after being assessed a flagrant-2 for excessive contact against Noah while trying for a rebound. Jones stretched out both arms to move Noah out of the way, making contact around the head.

By the end of the game, that play seemed like a love tap.

"Every time we play them that's how it's going to be," Bulls coach Tom Thibodeau said. "You have to have the mental toughness to get through all of that."

Wade and Chicago guard Richard Hamilton - rivals for years - raised the level of angst a few more notches early in the third quarter.

Hamilton led with his elbow and shoulder to create some space and Wade took exception - so he delivered an elbow and shoulder back, sending the Bulls' guard sprawling to the court. The jousting then turned verbal, enough to merit a technical foul for each, plus a flagrant-1 on Wade.

"Two people that are trying to out-will each other and fight to help their team win," Hamilton said.

And then things really got hot a few minutes later, not long after James was pulled down under the basket. James set a screen to free Chalmers from some pressure and was run into by Lucas, who gives up nine inches and 85 pounds to the two-time NBA MVP. Predictably, Lucas went flying. Even more predictably, Lucas - who was leapfrogged for a dunk by James in Chicago's first trip to Miami this season - got angry.

After Deng fouled Chalmers to stop the play and reopened a cut over his own left eye in the process, Lucas ran at James and the other eight players on the court at the time quickly converged on the area. It took referees about five minutes to sort out the mess, which only resulted in a personal foul on Deng and technicals on Lucas and James (who, upon hearing his name announced, shouted, 'For what?').

James shrugged off the next hit, a hard foul by Chicago's Omer Asik about a half-minute later, converting a three-point play in the process.

"It was a physical, competitive game against two teams that defend," Heat coach Erik Spoelstra said. "That tends to lead to a little bit more passion. And nobody was really backing down."