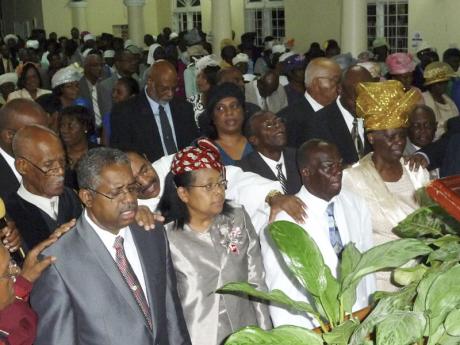 WESTERN BUREAU:Barclays Street in Savanna-la-Mar was the venue for the consecration service for two bishops of the Holiness Born Again Church (HBAC) on April 14.

The new bishops - Dr Evan O. Nepaul, pastor of HBAC Whithorn and chief executive officer of the Royale Medical Centre, and overseer Joseph A. Williams of the Little London assembly - were presented to the congregation by Bishop Jabez R. Lewis from Maryland, United States.

Hundreds of people spanning community and religious bodies attended the function, which commenced at 6 p.m. with a grand procession of bishops and board members marching to the tune of Richard Smallwood's Overture.

There were greetings and congratulatory expressions from Custos of Westmoreland Dossel Owen Sinclair; Bishop Frank Otto of the Jamaica Pentecostal Union, and overseers Norman Nunes and Keith Morris.

He added: "He is capable for the task ahead."

"Overseer Williams is undaunted by the challenges of life as amid temptations and trials, he has remained committed and unrelentingly strives for holiness, preaching the word of God without fear or respect of persons," he said.

In his sermon, Nepaul stated his desire to make a significant impact in his lifetime, especially in a society that is one of extremities. He decried laziness and apathy, and also encouraged Christians to make a difference amidst moral decay.

Nepaul is a fellow of both the Royal and American Colleges of Obstetricians and Gynaecologists. He is the head of the Obstetric and Gynaecology Department of Savanna-la-Mar Hospital. He and his wife Theresa founded the Royale Medical Centre in 1996.

Williams operates a clothing store in Savanna-la-Mar. A mason by trade, he is credited with the construction of many of the HBAC churches while his wife, Maureen, is a nurse assistant at Lutheran General Hospital in Des Plaines, Illinois.