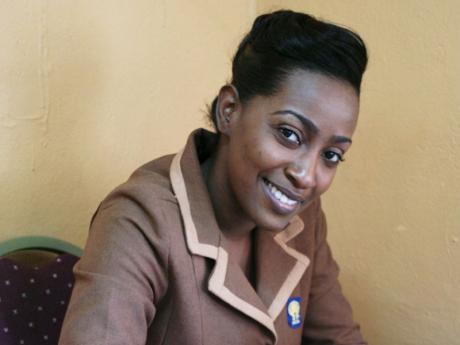 WESTERN BUREAU:Katrina Grant, Miss Jamaica Festival Queen 2008, has proven that she is as ambitious and philanthropic as she is beautiful.

"As a young woman, I believe I'm a role model for other young women out there who have dreams and aspirations. You don't have to be rich to achieve your goals," declared the former queen, who is employed as publicity and promotions manager at the Westmoreland Cooperative Credit Union.

"Even if you were born out of a poor family, you can still achieve your goals."

Born on October 4, 1982 in the community of Grange Hill in Westmoreland, Katrina is the third of five children - and the only daughter - for Winston and Delores Grant.

She graduated from The Manning's School in 1998, and from 2004 to 2009, she pursued a bachelor's degree in business administration at the Northern Caribbean University in Manchester.

Katrina explained that shortly after graduating from Manning's, she went to work at the Sugar Company of Jamaica, and funded study at university.

"My parents were low-income earners, but I decided that after leaving high school I would have gone on to university even if I had to work," she outlined.

"When I left Manning's School, I could not afford to reach university at the same time, but I worked and financed myself through university. So I believe that I'm an exemplary person that other young women can look up to, and I aspire for greatness."

That ambition is evident from her achievements before and after her victory as festival queen.

"I am a philanthropist; separate and apart from being a Rotaract member, I believe in service above self," she explained.

"What the mind can conceive, you definitely can achieve, and through God all things are possible ... . The strength and power lie within you. You can also be your greatest friend and your greatest enemy."