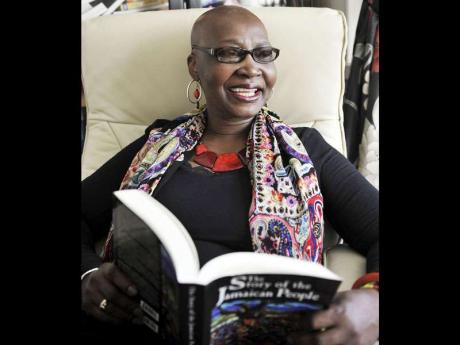 United Kingdom-based (and Jamaica-born) poet Ita Gooden has found herself on the starting blocks with the Olympics fast approaching, but she won't be making any dashes for a medal.

Instead, the qualified nurse and midwife will be putting poetry into motion after winning a chance to write a verse for the 2012 Cultural Olympiad.

Gooden is one of a dozen people across the United Kingdom who have been chosen to jointly write a special poem to celebrate the landmark event this summer.

She may not be a trained athlete, but the Birmingham grandmother was certainly jumping for joy when she got the news.

"I was in Dorothy Perkins when the competition organisers from the National Lottery rang me to say I had been chosen to represent the West Midlands," explained Gooden, who is also known under her performance name 'Miss Culture Jam'. She is a talented writer, storyteller, dramatist and comedian.

"I did a little dance of joy in the shop. I think people thought I had gone mad!"

Gooden won her place in the poetry stakes by putting into words how she sees the link between poetry and sport. She believes both activities involve striving for the highest level of activity and performance.

The National Lottery spearheaded the poetry project to celebrate its investment in the arts and sport. The finished verses will be showcased at the Olympic Park during the Games.

Meanwhile, the project organisers are helping her to get inspiration by arranging meetings for her with some of Britain's finest athletes. She recently met up with British triple jumper Nathan Douglas at Birmingham's Alexander to talk to him and watch him train.

But since she was born in Clarendon, Jamaica, Gooden's loyalties are divided and she has taken up the challenge to write a special poem for her Jamaican hero Usain Bolt.

"I would love to be able to give him a 'Welcome to Birmingham' poem when he arrives here for the training camp," smiles Gooden, who is part of the writing group Writers Without Borders, set up by Sue Brown.

"During the Olympics, I shall be wearing two flags and all I can say is, may the best man win!"

Gooden has been writing poetry since she was a child in Jamaica - the praise given to her by a teacher after she wrote a story about a donkey inspired her to write.

"At work or at church, if someone was leaving or getting married, I'd put together a poem for them," she said. She is also a qualified adult-education teacher who has lectured at Birmingham City University and taught at City College Birmingham. A former acting head of midwifery at City Hospital, she currently works as a specialist nurse in sexual and reproductive health.

She has just completed her first double CD of poetry called LA-Fire, which tackles love, life and culture with humour "allowing the listener to be emerged in thought-provoking, juicy bites from the art of everyday living".

She still performs under the label Mahogany Tree which she formed with Coral Pearle eight years ago, and is a regular at local arts centres.

But, in the meantime, she is looking forward to sharing the starting blocks with 11 other poets from across Britain for her part in scooping Olympic-poetry gold.