Book Review - A must-read for past students, history lovers 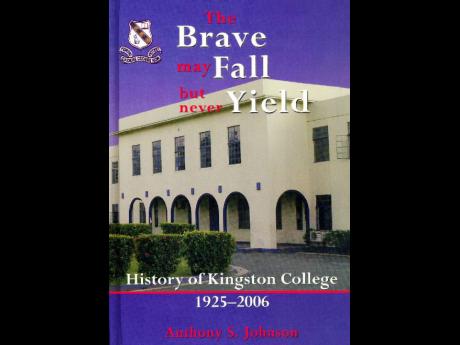 The prowess, proficiency and potency of unquestionably one of the most outstanding educational secondary organisations in Jamaica, is adequately detailed in the latest edition of former senator and statesman Anthony Johnson's The Brave may Fall but never Yield: History of Kingston College 1925-2006.

Johnson, the brother of former outstanding principal Ivan 'Wally' Johnson, who died last year, demonstrates, with masterful dexterity, how Kingston College, once ensconced on the site that The Gleaner Company - another landmark - now stands, has stood tall even among its older counterparts such as Wolmer's Boys' School; North Street neighbour, St George's College, and Jamaica College.

Naturally, the historical account blossomed through the efforts of an eminent team of educational stalwarts and professionals spearheaded by eminent religious leader, the Rt Reverend Percival William Gibson, who founded Kingston College and other respectable educational institutions across the island.

It is only fitting, therefore, that this latest edition of the History of Kingston College, in the inevitable purple-and-white hardcover - clearly a collector's dream - is dedicated to Gibson, the first principal, and his successor, Douglas Forest, whose, Johnson declared, "high ideals and aspirations continue to inspire all who pass through its halls".

The names of many prominent personalities, too many to single out, are highlighted in the exciting journey of Kingston College, but the institution would not be the same without reference to the women who helped shape those fortunate to walk the purple halls of Kingston College and bask in its famed motto, 'Fortis Cadere Cedere Non Potest', translated in English, 'The Brave May Fall But Never Yield'.

The indefatigable Helen Douglas, who served for more than 60 years at Kingston College, is worth her placement in the annals of the institution's history.

It was on April 16, 1925 - 87 years ago last week Monday - that Kingston College first opened its gates. Forty-nine boys entered its doors.

The records show that by 1948, a total of 500 students were attending the school, making it the largest secondary school in the country. Johnson also records that there was no stopping the school in other areas of endeavour.

Johnson, a historian, notes that major scholarships were commonplace and academic eminence lifted the school to known heights. When the JBC and later TVJ Schools' Challenge Quiz came on the scene, the school to beat was Kingston College.

The school acquired international fame through its prowess in sports. After winning the athletics trophy for the first time in 1949, it remains a dominant figure - any team which defeats Kingston College is to likely win the championship.

It was the school which first carved Jamaica's name at the Penn Relays.

There were other areas of dominance as the years went by - basketball, cricket, table tennis, and football.

Instructively, there is a table outlining just about every area of curricula and extra-curricula activity and the school's performance in them. Not only that, there is also a seemingly unending list of Kingston College past students and stalwarts who have performed with distinction in many walks of life.