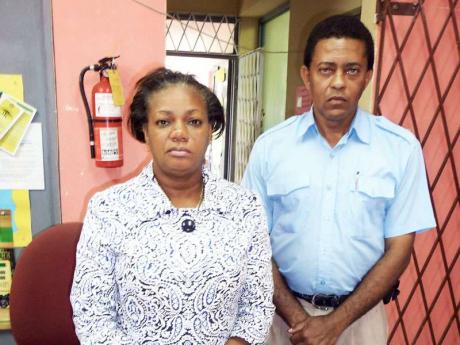 Grove Primary principal Suzette South and Douglas 'Dougie' Duncan who sees to the safe crossing of students at the Gordon Town main road. 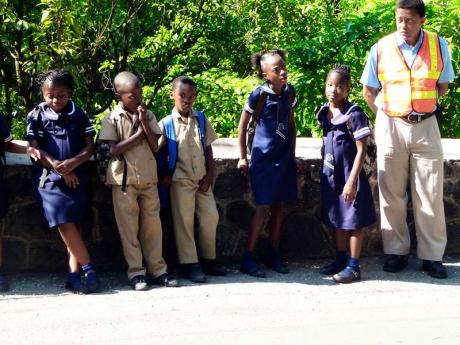 Douglas 'Dougie' Duncan with students along the Gordon Town Road, St Andrew, observing the traffic flow, as they wait to cross safely. - Photo by Sheldon Williams 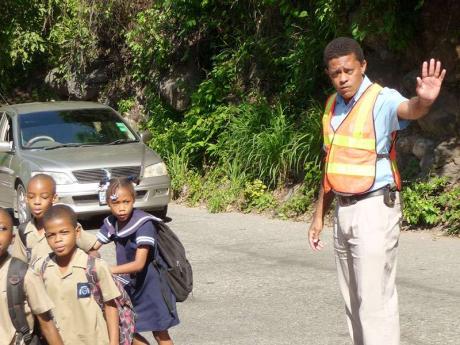 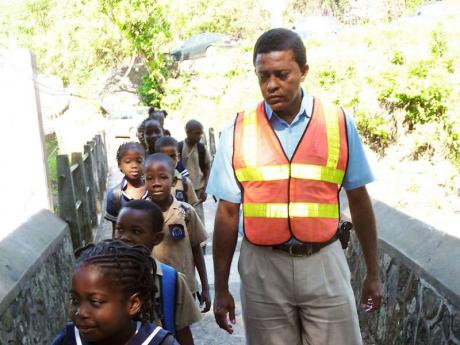 The children safely across, Douglas 'Dougie' Duncan walks with them along the footbridge which connects Grove Primary School to the Gordon Town Road. - Photo by Sheldon Williams
1
2
3
4

As many of the students who attend Grove Primary, St Andrew, arrive at school in taxis from Papine, they have to cross Gordon Town Road to get to school.

Principal Suzette South, explained the perils involved - and an incident three years ago which led to Douglas 'Dougie' Duncan being asked to get children across the road safely.

"The vehicles, they tend to come very fast around the corners, despite them seeing the school-zone sign," she reasoned. Notably, she pointed out that it was at her insistence that a traffic warden was put in place, following an accident along the Gordon Town Road involving one of her students, who narrowly escaped serious injury after he was hit by a taxi.

She said
that in February 2009, a student was making his way across the road when
the taxi came speeding around a blind corner and hit the boy on the
legs, the driver managing to brake quickly to avert a possible
fatality.

However,
out of near tragedy emerged an act of kindness as Smith pointed out,
"The taxi driver, after stopping, came out and actually took him across
the road. Leaving nothing to chance, the boy was eventually transported
to hospital for a thorough check-up to ensure that he was alright."

She recalled that the boy was "more frightened than
anything else, but I was teary-eyed".

Managing to put a
smile on her face after the flashback, Smith said, "With that, I said,
'Lord, you cannot be too careful'. Duncan was assigned the next
day."

So, at first thought, a traffic warden assigned
to a school zone might not spark much interest, or hold prolonged
attention, because some may consider it a norm, or a requirement even.
However, for students attending Grove Primary, Douglas Duncan (more
affectionately known as 'Dougie') deserves recognition as he performs
additional functions.

Immaculately attired in a
bright-orange safety vest to ensure that he is seen from afar, on
weekday mornings when school is in session, Dougie stands patiently in a
corner across the pedestrians-only entrance to Gordon Town Primary. He
stands only a few feet away from the school's entry point, on the other
side of the roadway. From as early as 7:15 a.m. until 8:20 a.m., he
awaits the arrival of students by public transport, especially taxis
travelling from Papine and adjoining communities.

At
first glance, Dougie may seem unassuming as he stands taciturn, upright
and alert like a sentry. Although a man of little words, Dougie has
proven, time and time again, that his non-dependence on dialogue is by
no means a shortcoming in executing his crucial role.

As he hoists his right hand into the air, vehicles
travelling in both directions come to an almost-immediate standstill,
allowing children to cross at his
gesture.

Automotives was impressed
by Dougie's traffic signals and motions, and noted the respect that he
commands from motorists as well as the admiration he receives from the
little ones. Attending to the tedious task at hand, his eyes fluttering ,
Dougie still offered some insight into the life of the man who wears a
reflective orange vest and has the lives of many of Grove Primary's 340
students in his expressive hands.

Neatly attired in a
short-sleeved sky blue dress shirt and brown denim pants, Dougie
outlined a typical day as the school's warden. Explaining how he grew
into performing his duties so professionally, he said, "sometimes, I
watch the police ... . It's common sense and observation of police
personnel".

Dougie displayed how he has established an
impressive reputation for himself, so much so that taxi drivers who
transport children to the school decelerate as soon as they see him and
stop their vehicles beside him so that he may easily assist the students
to cross the roadway.

As taxi after taxi stopped, Dougie would
open the door, assist the children to alight and escort them across the
roadway, making the procedure seem like second nature. Dougie has grown
attached to and developed a high level of responsibility for the
students over the years, knowing many by name. "I know some of them by
name - and, if not by name, certainly by face," Dougie
joked.

Interestingly, he outlined that he is not a
trained warden, but is actually employed as the school's watchman and
performs the dual roles. He also proudly emphasised that since he has
been carrying out his traffic-warden duties for the past three years, he
has never once been absent, nor has he ever been late.

"He (Dougie) goes out there,
religiously, every morning," South said.

According to
South, she visited the office of the National Works Agency shortly after
the incident, which led to Douglas' appointment and proposed that a
pedestrian crossing be established for the school. However, that request
was not met because of the blind corners on that section of the Gordon
Town Road.

The denial of the crossing facility further
motivated Smith to establish the safety precaution on her own, asking
Dougie to act as a warden on a permanent basis after his temporary
posting.

Dougie pleads with motorists on Gordon Town
Road to slow down.

"Next time when you see me on the
road, please, just slow down. I am crossing children," Dougie
said.