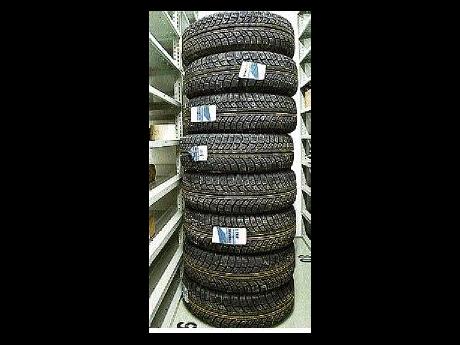 Tyre technology has made welcome improvements it seems. - Contributed

I remember the first time I saw someone stay inside their car and open the gas tank. This was, of course, a long time ago - it might have been the late 1970s or early 1980s. It was at the Shell gas station in Morant Bay, St Thomas, a place where as a child I was accustomed to drivers - including my parents - handing their keys to the attendant.

But lo and behold, I saw the required lid on this car flip open without anyone touching it and I was amazed.

Of course, to see someone hand their car keys to a gas station attendant these days is about as odd as encountering someone who does not have a cellphone. And what passes for technology in cars has long gone into what I consider the realms of the ludicrous.

However, as far as drivers go, I not only drive a car which falls well short in the technological category, but am woefully short on advanced technology in my life generally. How short? The MacBook I am writing these 500 or so words on is about as far as I go - I recently learnt how to display the PIN on my two year-old, dog-bitten BlackBerry.

That said, I believe that the technology-driven sales angles that seem to be an integral part of pitching cars these days are well overdone. Connectivity for days, from bluetooth to whatever. DVDs and TVs are old hat now. I guess MP3 capabilities are standard now. Computers that close down some cylinders of the engine under particular conditions to achieve better fuel consumption. Other computers that shift the grip from one wheel to another to prevent skidding. Even more computers to have the headlights dip when other vehicles are coming in the night. Heated seats (yeah, great for tropical countries!). Smart keys.

The list goes on and on and, in the main, it adds up to two things - more distraction for the driver and less reliance on his or her skill. And, overall, there is another factor - trying to score points in distinguishing one item which is basically the same as another.

OK, so it is not as bad as the packaging separating one brand of counter flour from the other, but in the respective categories, from compact through to SUV, one domestic-use motor vehicle is the same as another. They may have slightly different shapes, but they are basically boxes designed to carry an optimum number of people around in safety.

Nothing more, nothing less.

So the technological factor is flung in, with mind-boggling acronyms designed to dazzle as you sign on the dotted line, committing a significant part of the next five years of your income to this vehicle.

There are those who still swear by the old technology, like carburetors (remember those, when every motorist had a tin of cleaner and had to get the device balanced regularly?), but by and large there is no choice in buying a newer vehicle. It is like avoiding multi-coloured sneakers - very hard to get around, as it seems that is all they make.

Still, while most of the technology does not seem to make much difference to driving, there is one that I really appreciate. There must have been a lot of attention paid to developing tyres over the years, because there are so fewer persons laid up on the roadside these days, scissors jack in action as they deal with a puncture situation.