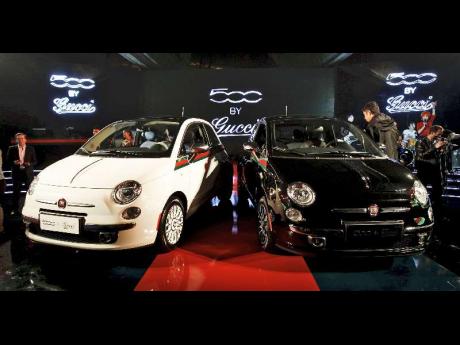 Two newly launched Fiat 500 cars co-designed with fashion house Gucci on display after a launching in Beijing, China, Thursday, April 19. Automakers are bringing SUVs and luxury sedans designed for Chinese buyers to China's biggest auto show this year as they scramble to keep sales growing amid a slump. - AP

Some noteworthy new models are due to make world debuts at Auto China 2012 in Beijing, which opens to the public on April 27. The show is an important platform for automakers who want to boost sales at a time of slower demand in the world's biggest auto market.

INFINITI: M35hL sedan, designed for Chinese businesspeople and government officials, with an extended back seat and gas-electric hybrid 306-horsepower, 3.5-liter V-6 engine. Goes on sale in June and is also due to be sold in the United States.

DENZA: Display version of first model from this joint venture between Daimler AG and China's BYD, an all-electric sedan due to go on sale in China in 2013.

VENUCIA: First car from this joint venture between Nissan Motor Co and China's Dongfeng Motor Group Co, an electric model due to go on sale in 2015.