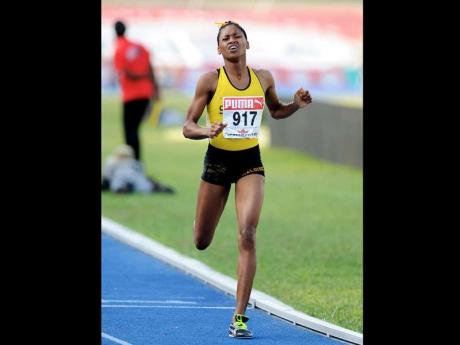 Semoya Campbell of Spalding High is a picture of grit and determination as she wins the girls' 800m Class 1 title at Boys and Girls' Champs on March 31. Scouts have tried, in vain, to woo Campbell and other athletes to more elite schools with lucrative offers. 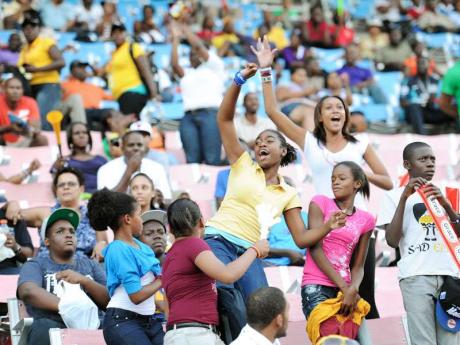 Track and field fans celebrate in the grandstand during Boys and Girls' Championships at the National Stadium on Friday, March 30. The awesome pressure of Champs drives some schools to use gifts to lure promising athletes away from non-elite institutions. - Ricardo Makyn/Staff Photographer
1
2

Two hundred and sixteen schools vied for top honours at this year's staging of the 102nd ISSA/GraceKennedy Boys and Girls' Athletics Championships at the National Stadium. Congratulations to Calabar High, which emerged winners for the boys, and Edwin Allen High for the girls.

Champs this year was billed as the best ever. This year's event was the most spectacular and entertaining of all. We must offer kudos to ISSA, the sponsors, the athletes and all others involved in making it the success that it was.

However, with all the money Champs and other high-school sporting events bring to ISSA and others, as well as the glory, excitement, entertainment and thrill they bring to the athletes, coaches and schools, they have a soft underbelly that our educators and others should look at seriously. This has to do with the mission, the function, the role of sports in the educational framework of our high schools.

Our high schools are specialised educational (academic/technical) institutions. That is their core function. That is why they are equipped, at great expense, with science, IT and language labs, as well as specially trained personnel.

Another important function of high schools is the socialisation of our young people. Schools help to inculcate the principles, values, attitudes, ethics and life skills that the society should hold dear.

The socialising role of our high schools takes on even greater significance, especially at this stage in Jamaica's development, when the family is experiencing severe social and economic challenges. The resulting grave deficiencies render many families incompetent or profoundly burdened to impart the expected social skills and values to our youngsters.

In an educational framework like the high school, sports functions as a teaching aid and tool, an extension of the classroom. It can be an especially effective socialising instrument, since here the teacher-coach has a chance to capture the imagination of the youngster, even the recalcitrant youngster - often a daunting task in the classroom - because he/she is so interested in the activity.

The core function of sports in an educational setting is to teach our youngsters how they may strengthen behavioural, emotional and social skills while they master the technical skills of a particular sport. This implies that for our children to realise the greatest benefit from this activity, sports must be approached in the spirit of 'it is not whether you win or lose, but how you play the game'.

Measured using the yardstick of a teaching tool, an extension of the classroom, a transformational tool, a socialising instrument, sports in our high schools gets a very low grade indeed. Instead of being used as a means to influence the culture, sports in our high schools is simply being pushed along by the culture, merely an expression of the culture. Hence the win-at-all-cost approach, the ends justifying the means maxim, the beat-the-system syndrome seem entrenched in our high-school sports.

This is clearly signalled by the rampant and widespread practice of importing sporting talent into high schools in an attempt to influence the outcome of sporting events between schools. In this way, the school with the best talent-gathering mechanism wins, since an ace team is assembled at that school. The corruption, injustice, double standard, warped messages and other ills that this generates serve to undermine the purpose of sports in high school. Is this in keeping with what should be the spirit of sports?

A brilliant young runner, Semoya Campbell, from Spalding High, represented her school at Champs in Class Two for the first time in 2011, having been discovered by her very competent, able and hard-working coach, Meggan Wilson-Copeland. She won the 800 metres. Shortly after Champs, representatives of another school which has built its sporting reputation essentially on the backs of importees contacted her home and offered a refrigerator in an attempt to have Semoya relocate to the bigger school.

Is this in keeping with the spirit of sports at the high-school level? Is this sending the right messages to our youngsters? Is this how we want our youngsters to be socialised?

This year at Champs, Semoya, representing Spalding High, easily won the 800m and 1500m and represented Jamaica at the Carifta Games where she again easily won both races. Semoya has had the guts to resist inducement. There are others, however, who have been enticed to bigger, richer schools. They would have done just as well at their original schools but were persuaded to transfer their success and the benefits of success to the raiding school.

No major country, no country of consequence, no self-respecting country in the world condones the importation of sports talent up to high school level - not even the USA, the recruiting capital of the world. Only in banana republic types would that be tolerated, much less encouraged by the authorities.

Yet, we have heard of so many instances of violent acts carried out by youngsters associated with Champs. The police have had to ban parties. Champs itself has had to be saturated with security personnel in an attempt to buffer student from student.

Does this not suggest that it is time that we take another look at the emphases and direction of sports in our high schools? Although ISSA and others are making money, are we not being blindsided? Are we acting in the best interests of our children and Jamaica? Is it, as Ernie Smith sings, "As we fight one another for the power and the glory, Jah kingdom goes to waste?"