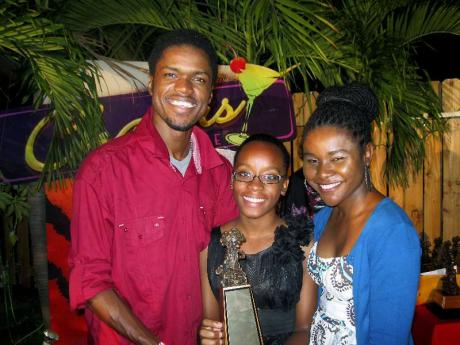 Adding another string to the spider web, director/actor Damion Radcliffe will be treating theatre audiences to another play in the Anancy Chaptaz series.

Radcliffe, the writer and director of the play, started the series last year in celebration of Child's Month. After entertaining audiences, it went on to secure five nominations in the 2011 Actor Boy Awards in categories such as Children's Theatre, New Jamaican Play, Special Effects, Choreography and Original Song. In the end, it won Best Children's Theatre Production.

In this next instalment, Anancy Chaptaz - Gold Rush, which begins showing in May, Radcliffe puts a spin on the folklore.

Gold Rush will give another take on the story of the golden table of Rio Cobre fame, transporting young audiences to a greater appreciation of Jamaican folk tales via storytelling, music, colourful and funny characters and special effects.

As with the first Anancy Chaptaz, there will be a positive message woven into the "web of stories" with "excitement at every bend".

A main thread in the Chaptaz series, Anancy will be shown as a character of positive smarts rather than a thief and a liar.

Sabrena McDonald, producer of the play, explained that Anancy Chaptaz was always meant to be a series.

"From the beginning, Damion Radcliffe's Anancy Chaptaz was conceived as a series of theatrical adventures for children. Each chapter is hoped to weave audiences into a closer appreciation for our culture and folklore through storytelling, music, spectacle and dramatic action," she told The Sunday Gleaner.

She said the first chapter, Di Beginnin re-introduced the character, Anancy, to a newer younger audience. Gold Rush is a continuation of the series with the vision being "to stimulate the same appetite for Anancy and things Jamaican among our young people as they currently have for the Harry Potter and Twilight series."

She said the theme was "fuelled by the mystery of the stories that surround Rio Cobre, the golden table and the intriguing river mumma. So much has been said and done regarding this story, but no one really knows the truth."

Therefore, McDonald said Gold Rush is the writer's version of the truth. But in the process, she said the story will not be told how it is usually told in books or other theatrical productions.

In this leg of the Anancy Chaptaz, McDonald said humour and music will play major roles in how the story is told in an effort to appeal to the audience.

"Damion has found his own style of humour that wraps up cultural lessons in pop culture motifs and good comedic timing in the dialogue and direction. Music is also one of the magic ingredients. Last year, children left the show singing all the songs and those who bought a production CD, their parents inform us that the songs are still on the family's playlist," she said.

Like last year, the music was written by Radcliffe and McDonald, and composed by Winston 'Bello' Bell, while Paula Shaw is in charge of choreography. This time around, she noted that special attention will be paid to the special effects on stage. In addition, the cast is made up of adults actors from the Independent Actors Movement and children from schools like Campion College, St Richards and St Francis primary schools.

When both plays in the series are compared, McDonald said there are similarities in terms of the characters, humour, music and poetry. However, "the major difference between the two shows is the focus of the main stories."

Based on last year's success and the award the play received, McDonald said new followers might be created.

"We feel elated, excited and motivated. The nominations and award was testament of the hard work put in by the cast and entire production crew. It reminded us to push on with our dreams regardless of limitations. There is also a challenge for us to improve our standards; to make 'award winning' be our mode even if we don't win external awards," McDonald told The Sunday Gleaner.

"We hope the accomplishments will attract new lovers of the Anancy Chaptaz series in the form of audiences and sponsors. We know that it will motivate the entire production team to put on a fantastic production. So we would love to know that many individuals share in the fantasy."

The first staging will take place at the Edna Manley College of the Visual and Performing Arts' School of Music Auditorium, 1 Arthur Wint Drive, Kingston 5, on May 19 at 2:30 p.m. It will also be shown on May 20, 26 and 27. Each day, audiences can view the play at 2:30 and 6 p.m. However, McDonald said the play can be restaged at the request of prospective patrons. She said there are also plans to remount the play later in the year. If persons are interested in booking a performance, they may call 820-9749 or 820-9754 or send an e-mail to iamtheatre2@yahoo.com

"We would love to see a lot of schools, church and community groups in the audience. We want all children from 0-100+ to share in the 'colourful chapters of Anancy'. It's the perfect evening out for the entire family and for anyone looking for excellent entertainment," McDonald said.