The Dragon before soca 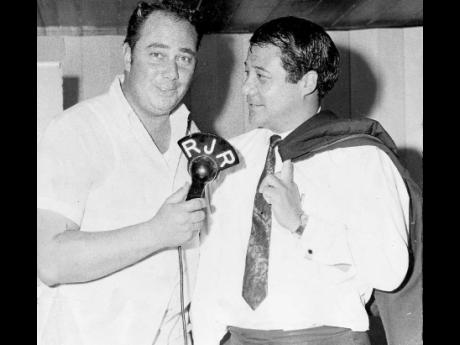 When RJR's Band of the Year, Byron Lee and the Dragonaires returned to Kingston on The 'Jamaica Queen' in 1968, RJR's 'Hound Dog Man', Charlie Babcock, was on hand to welcome them back. 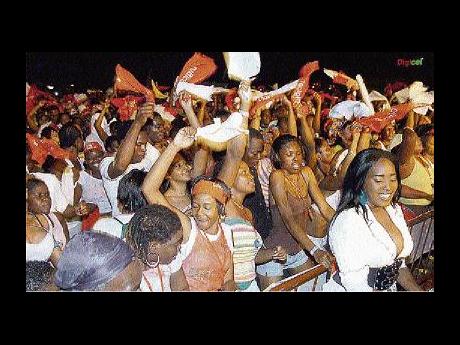 Much has been said and written about Byron Lee and his exploits with soca music and Jamaica Carnival, but little said about his early years and the foundation on which his musical career was built.

Now, more than any other time, it being the half-century celebration of Jamaica's Independence, coupled with the imminence of the carnival season into which Byron was deeply entrenched, it is most opportune to focus for a while on his early years.

Lee was, in fact, born Byron St. Elmo Aloysius Ignatius Lee in Christiana, Manchester in 1935. He attended the Mt St Joseph's Academy in Mandeville. Strangely though, this was a girls' school, and the understanding, according to his son Byron Lee Jr, was that piano lessons were taught there and his parents were interested in him learning the art.

It was at this school that Lee's involvement with music really began, and the piano was in fact his first love, apart from the girls of course, something Byron himself referred to in an interview I had with him in 2006.

Although born into a fairly wealthy family, Lee suffered a fair amount of 'ups and down', in his early life. During his pre-teen years, his father Oscar had made arrangements to relocate his family to China, but that suffered a setback owing to an upheaval in China at the time. A parental separation also exacerbated the situation. His family then moved to eastern Kingston, where Byron attended Campion Preparatory School, and later on St Georges College.

Although things were rough at the start, Lee became an academic standout, a capable pianist and famous footballer. We pick up the story from the interview I did with him in 2006:

Roy Black (RB): I understand the Dragonaires started out at Emmett Park. Take us through those early years.

Lee: I started out in 1956 and it all started as a fun thing. We won so many trophies that year. The battle of the giants - St Georges-KC, and I happen to be a leading goalscorer at the time, and a lot of people don't know that. We won three trophies that year - The Major Cup, The Minor Cup, and the knockout, and we celebrated in the dressing room after the match with pots and pans, and since I could play the piano, I brought one from upstairs Emmett Park. Thereafter, we played for some three years just for fun.

Well, since we are on the subject of the piano, tell us how you learnt it.

From I was in boarding school, Sister Baptiste, from Mt St Joseph Mandeville, said to me one day, 'What do you want to do, so that I can stop punishing you for playing with the girls', to which I replied 'Learning to play the piano', and from then on the girls had a peaceful time. That was my first love and I played the guitar occasionally, just to hold the chords, and, gradually, I switched to the bass, which was non-electric in those days.

Anybody taught you to play these last two instruments?

Well, I got a little training from George Harriott, a number-one guitarist in Jamaica at that time, but nobody taught me to play the bass. It just came out of my body.

When did you start getting engagements and that sort of thing?

Initially, we got engagements from our school colleagues, like those getting married, having birthdays, anniversaries and graduation. We just got together and played for them for free. Then in 1960, came along the producers for the first James Bond movie, Dr No, part of which was filmed in Jamaica. They paid us to play our music in the movie. So that's where we got our headstart from. After that, we became very much in demand, and fully professional.

How did you get into the recording business?

Well, the thing about it was this: Mr (Edward) Seaga, before he went into politics, was a lover of music and heard me one night playing, and said, 'Byron, I would like to record that tune you're playing'.

Was that song 'Dumplings'?

Yes, Dumplings. So we took him to RJR studios, recorded it, and it became a big ska hit - my first hit, which stayed in the top 10 for many weeks. The follow-ups, Dragon's Paradise and Firefly Jump-Up, were co-written by me with George Harriott and Buddy Davidson.

But you are also responsible for taking ska to uptown folks, who snubbed at it, and made them accept it. How did you go about doing something like this?

In the 1950s when I started, we didn't have a Jamaican sound at all. We were playing mento, big-band music and American classics. Mr Seaga, who was then minister in charge of development and welfare, called me and Carlos Malcolm, who were the leading bands at the time, and he said to me 'Byron, go down into Wellington Street, below North Street, and you'll see where they have a music called ska. It is not a music that is being accepted by uptown folks. I want you to take that music uptown and popularise it'. So said, so done. Glass Bucket that night - ska goes uptown, saw 10,000 people outside in the road.

I understand you also took it international, too. Tell us about that.

In 1962, when we got Independence, Mr Seaga again called me into his office and said 'We cannot attain Independence without a music to call our own. You cannot attain sovereignty with other people's music. Trinidad had calypso, Dominican Republic had meringue, Cuba had cha cha, and Panama had mambo. Take this music to New York and put a dance to it'. Rhonnie Nazrala and Castro designed a dance and we took a team to the New York World's Fair in August 1964. On Jamaica Day, 30,000 people for the first time witnessed a music and dance called ska from Jamaica. The rest of the time it was just lingering in the dancehalls and on sound systems.

Look out for part 2 of this interview in next week's instalment of The Music Diaries.