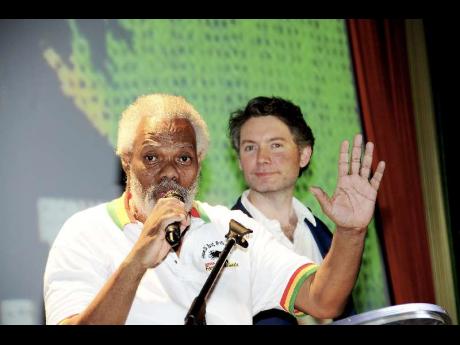 Ibo Cooper, former Third World member and head of the Jamaica Reggae Industry Association speaks prior to the showing of the documentary. Kevin Macdonald, director of the movie, stands in the background. 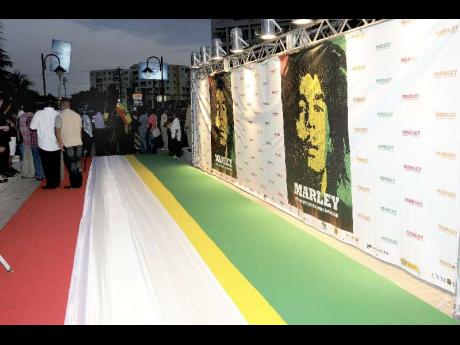 The controversial red, green and gold carpet at the premiere..
1
2

The premiere of Marley - A Definitive Story got off to an exciting start at the Emancipation Park in New Kingston last Thursday evening.

At about 6:30 p.m., specially invited guests, family members and well-wishers had already begun walking the red, green and gold carpet.

Putting a damper on the evening's activities, a scuffle ensued outside, with one patron insisting that the colours of the flag (Rasta flag) should not have been placed on the ground for people to trample on.

The irate dreadlocked man insisted that his religion was being disrespected and that this should not have been allowed to happen.

Nonetheless, the park was already abuzz with patrons who had arrived early and were seated on towels and blankets to get a glimpse of Bob Marley's story.

The air was full with anticipation as well as cannabis, as fans of the reggae icon greeted each other and grooved to his musical catalogue.

Songs such as One Love, Could You Be Loved, Buffalo Soldier and Jammin', had the patrons singing along while shouting "Jah Rastafari" intermittently.

Former member of Third World, Ibo Cooper, opened the proceedings by inviting the Drummers from the East on-stage. Cooper stated that he was honoured to be at the event to recognise an icon.

Cooper also informed the audience that The New York Times had built a capsule to be opened in the year 3000 in which some memorabilia could be found. This was met with resounding applause and shouts of 'Selassie I'.

Minister of Youth and Culture, Lisa Hanna, in her address to the patrons, said that Marley's "lyrics mobilise people to demand justice" and that he also placed Jamaica in the collective memory of the world forever.

One of the first scenes in the movie saw Marley performing his chart-topping hit single Exodus.

Members of Marley's family including daughter Cedella, wife Rita, and other musical icons such as Jimmy Cliff and Bunny Wailer, all testified to the fact that Marley initially faced rejection because of his mixed heritage.

The movie's recurring theme of Marley's triumph over prejudice and 'babylon' sat well with the audience.

At minutes to 10 p.m., it began to rain, but so riveting was the movie that the undaunted audience refused to move from their seats.

There was a sense of sadness that hung in the air when pictures of a gaunt-looking Marley flashed across the scene without his locks that had begun falling out due to cancer.

The movie ended with a standing ovation from the crowd and resounding applause. Many patrons commented that this documentary had opened their eyes to a different side of Marley.

One member of the audience remarked that this was the best documentary she had ever seen.

"I have never yet seen any pictures of Bob's father or any pictures of him without his hair so it's good that the director was able to capture these moments. I thoroughly enjoyed it. It was a bit heartbreaking, but I enjoyed it," he said.

Director of the movie, Kevin Macdonald, told The Sunday Gleaner that "it's obviously a huge privilege to get to make a movie about Bob Marley, who is not only one of the major musical figures of the 20th century, he goes beyond music. He is a figure who appeals to people on a spiritual level, and on a philosophical level as well. To be the person chosen to make this film is a real honour, and to show it here tonight, in Kingston, in Bob's homeland, this has got to be the best premiere ever. It puts Titanic 3D to shame," he said.

Marcia Griffiths, who toured extensively with Marley as a member of the I-Threes, said that the turnout was overwhelming.

"The turnout was beautiful. I am just in awe, I am shocked and speechless, sad and happy - a lot of mixed feelings. I am just hoping that everyone that was here might learn from what they just experienced, that life is the most important thing. Your health and your life that God gave you should not be taken for granted, that's my few words," she told The Sunday Gleaner.