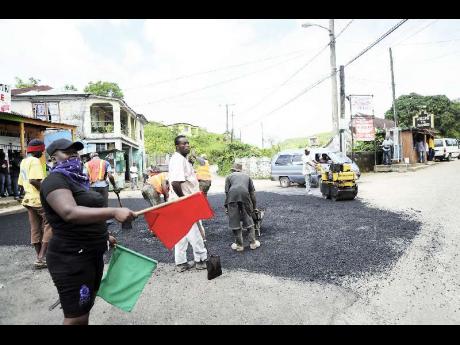 Recently, Gene Autry hosted a domino game at his new home. The old gang was scattered worldwide so new victims were found. We sat at the senior table against The Headmaster and The Professor, leaving the junior table for qualifiers like The Easton Star; The Wreck; Knight and Day; and other assorted hopefuls to attempt graduation to our table by winning.

But the game seemed more like pinochle at a home for the aged and infirm than serious dominoes. In one hand, Professor (my right-hand opponent) posed double six. Autry passed and Headmaster essayed six-five. Suddenly, while I contemplated how best to extricate the partnership from this early setback, Gene Autry, with a huge flourish, banged down five-four.

As if that wasn't enough, he swivelled (not a simple manoeuvre at his age) to face Professor, jaw and chest equally protruding, and challenged, "Play now if yu bad!" The minor glitch in his strategy was that it wasn't his turn.

Despite many similarly senior moments, we were able to dispatch our opponents with much love, but it got me thinking about waiting one's turn. In a very unpopular column published on January 8 ('Jamaican voters missed the boat'), I warned this recycled PNP Government:

"If you don't move immediately to bring full independence to Jamaica after 50 years, including abolishing the monarchy; making the governor general the first public-service job lost by 'attrition' (no Jamaican queen, please); eliminating Privy Council appeals; and by keeping MPs out of the Cabinet ... I'll be showing you a yellow card ... ."

Jamaica is waiting its turn. Just like Bob waited for Cindy.

"I don't wanna wait in vain for

I don't wanna wait in vain for

It's been 3 1/2 months since the PNP's big win. Did Jamaica lose? What's changed? The PNP is focused on rubbing the JLP's face in its electoral loss by every available means, including a disgraceful desecration of the Jamaican flag. A monumental cover-up followed, including unforgivable acts of public dissembling and the spectacle of a sonorous senator who doubles as a media practitioner disparaging critics of the abomination as idlers with nothing to do. There's more orange and less green everywhere, but no other change.

We were promised 5,000 new jobs would be created in March. Now that a March 26 event has passed and urgent infrastructural projects (like the Fern Gully improvements) have been halted, the new boast is less than 1,200 JEEP jobs "created". The Gleaner reported Lucille Brodber's claim of 612 jobs "created in the agricultural sector" and 580 "by way of works being implemented by the NWA".

But these jobs appear to be
ongoing jobs involving no new creation whatsoever. Additionally, JEEP
boasts of having trained 85 persons as teachers' aides. How? Where? In
one month? Ten more are alleged to have been trained in clerical work
(but not by JEEP; BY THE labour ministry). None of these alleged
trainees have a job. Yet JDIP projects are stalled and funds transferred
from several ministries and agencies on the pretext that it would
create JEEP jobs.

When will the GOJ account for those
transferred funds? Jamaica has been operating without a budget since
April 1. On what authority are we drawing cheques? Why is this
foul-smelling national pork barrel called JEEP allowed to continue? When
will Jamaica's turn come?
FOUL!

down on your
line,

but the waitin' feel is
fine.

'Cause I know I've to do my

Don't
talk to me as if you think

I wanna know when you're

Follow-up
No 2: "If 'tax reform' doesn't result in more people
paying taxes so each can pay less, I'll be crying
foul."

There continues to be everlasting
tax-reform talk, but the finance minister has already conceded that his
idea of tax reform is to increase taxes. This wasn't a Tax Reform
Committee recommendation. In Opposition, the PNP screamed loudest
regarding the incontestable fact that Jamaica has reached its taxable
limit. A Government serious about tax reform must concentrate on three
priorities:

1. How does Government spend taxes it
collects? Is it held accountable for pork-barrel spending and for the
profligacy of its ministers?

2. When will huge tax
waivers to large corporations, hotels and party hacks be discontinued?
Will MPs agree to set examples by forgoing tax waivers on imported motor
cars for their personal use? What new benefits will other taxpayers
(e.g., senior citizens) get from 'tax reform'? Or will their benefits
(e.g., pensions) be reduced?

3. When will everybody be
brought into the tax net and PAYE taxpayers and others already
registered, making returns, and paying taxes annually cease to be
bullied and threatened? What did the tax authorities do about the
millions of dollars found at 'Zekes'' home by the police during his
arrest for murder? Has Zekes ever filed a tax return? Where's that money
now?

Until these questions are satisfactorily
answered, Jamaicans oughtn't to tolerate any tax increase. FOUL! When
will taxpayers' turns come?

I've received three JPS bills
since the PNP won an election on a solemn promise to remove GCT from my
electricity bill. The GCT is still there. Every Jamaican voter
registering more than 200kWh, who was tricked into voting PNP by this
callous, contemptuous promise, is still paying GCT on his/her
electricity bill. FOUL! When will Jamaicans' turn
come?

"I don't wanna wait
in vain for

I don't wanna wait in vain
for

'Cause if summer is
here,

and I'm still waiting
there."

Follow-up
No. 4: "If the external debt increases
significantly, I'll be screaming foul."

At
the end of 2011, Jamaica's direct external debt stood at US$6.287
billion. In January, it increased to US$6.294 billion and, in February,
to a humongous US$6.703 billion. Additionally, during the period,
government-guaranteed external debt rose from US$1.302 billion to
US$1.303 billion.

Meanwhile, back at the ranch, there's no fetter
on the finance minister's power to increase our external debt. Nobody
even proposes restricting him, whether by constitutional cap or
otherwise. We're sliding down a slippery slope to economic perdition.
FOUL! PNP activists' turn has come to head many statutory
boards/government companies and to get plum 'adviser' jobs. When will
Jamaica's turn
come?

Follow-up No.
5: "If interest rates or inflation starts creeping up
again, I'll track each and every increase in these
columns."

Don't get me started on inflation.
According to the Statistical Institute, inflation for January, as
measured by the Consumer Price Index (CPI), was 0.4 per cent and, for
February, 0.8 per cent. Despite this statistic's obvious disconnect from
reality, it's showing a doubling in February's inflation
vis-à-vis January's.

The problem
with the CPI as an inflationary measure is that it tries to measure
household expenditure based on weighted retail 'prices' of 12 items
placed in a notional 'basket'. It can't measure changes in living
standards and it presumes every household lives on the items in this
'basket'. I'm sure I don't have to tell you that fuel cost isn't an item
in the CPI's basket, although 'transport' is. The problem with that is
government regulators keep 'transport' prices artificially
low.

Despite screams for fare increases since January,
because of the oppressive rise in fuel prices, none have been granted.
Yet, we feel the fuel cost increase every day in our basic items
"basket". So, the sharp increase in "official" inflation for February
will give the discerning reader an idea of what real inflation rates
are.

According to the BOJ website, commercial banks'
average lending rates dipped under 18 per cent for the first time in
years (17.98 per cent) in May 2011. By December, it was 18.30 per cent.
In January and February, it rose to 18.48 per cent before dipping in
March to 18.12 per cent. The movement in real and official inflation
tells us this is an artificial and temporary reduction. We're once again
on the road to a high-interest rate/high-inflation environment to
support wild political
spending.

"Tears in my
eyes burn; tears in

while I'm waiting; while I'm

waiting for my
turn."

Follow-up
No. 6: "If you don't move immediately to bring full
independence to Jamaica after 50 years ... I'll be showing you a yellow
card.

What do we hear? We don't have the
money for a proper 'Jamaica 50'. But we can divert taxpayers' funds to
clean gullies. We hear talk of abolishing the monarchy but, as usual,
nothing concrete has yet been done. And nothing is likely to be done
about getting rid of all the trappings of the monarchy, including the
anachronistic office of governor general.

It's not
fair to dupe us into believing that the monarchy is being abolished if
your plan is to simply change the name of the governor general's office
to president and usher in a Jamaican queen via that route. If we are to
abolish the monarchy, we must abolish all that goes with that type of
government, including the governor general, or any other expensive
ceremonial post; the Privy Council; and the Westminster parliamentary
system.

At the rate we're going, I'll soon be reaching
into my back pocket.

PS: Last
Tuesday's column criticised CTL's 40 per cent takeouts from exotic bets.
I was wrong. Young CEO, Franz Jobson, was kind enough to update my
obsolete knowledge. Only the Pick 9 remains at 40 per cent. Other
exotics takeouts are down to 35 per cent. The place pool takeout has
been reduced further, to 20 per cent. These are moves in the right
direction.

Gordon Robinson is an attorney-at-law.
Email feedback to
columns@gleanerjm.com.