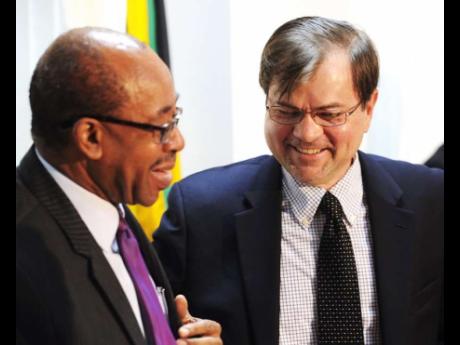 It has become a hackneyed expression saying how great a potential Jamaica has for socio-economic growth and development. For me, it is frustrating. I have been writing about Jamaica's potential, culturally and socio-economically for some 44 years.

My motivation to write on this subject for The Gleaner, STAR, Swing and Abeng publications came from the people with whom I interacted from my teenage years. I saw this potential first in the cultural sphere, primarily the music industry that brought out some extraordinary talent as producers, musicians, singers, and songwriters.

I was privileged to enter into negotiations with major record labels in America in the early 1970s, with Bob Marley and Allan 'Skill' Cole to get one of the 'majors' to get Bob and the Wailers a more lucrative contract than the one they had newly established with Island Records.

Later, I represented Leroy Sibbles in similar discussions with the 'majors', and through my company, Fiwi Productions, produced major reggae concerts with the likes of Burning Spear, Mighty Diamonds, Toots and the Maytals, The Skatalites and Third World.

On the heels of seeing the great potential the music held was the recognition of the similar potential for Jamaica's agricultural products in the American market. This came from first-hand knowledge operating in this sector for more than three decades. There was no product we imported from Jamaica, fresh or processed, that was hard to sell.

One of the primary lessons learnt from these experiences is that because we were, as are most Jamaican companies operating in the export business today, a small company with limited access to working capital, demands overwhelmed our abilities to supply the markets efficiently. And because of an absence of a national sense of purpose, a government-backed objective to make affordable financing available to small and medium-size businesses, in short order markets are lost, and thereafter several businesses fail.

That is why, in my Develop Jamaica Initiative, I advocate the statist approach of a development policy. As I have stated in several articles, the Jamaican Government must play a more proactive role in setting policy and support through easier access to affordable capital, sound management, creative marketing, and consistent research and development.

Between 2002 and 2009, I approached several Jamaican banks, including the Development Bank of Jamaica, the Export-Import Bank of Jamaica and the PC Bank in Portland where the business is located, seeking financing for a company in Jamaica that I have an interest in. We sought working capital to finance agriculture, processing and quarrying with strong export components.

Among the documentation provided to the banks were pro forma invoices from companies in New York showing that the revenue to be generated in the first year was twice the amount being sought. They declined. The banks can always find intangible reasons to say no. No one saw the jobs to be provided, the export earnings to the country, and the potential for growth.

Recent emphasis on 'growth' comes from as esteemed an entity as the International Monetary Fund (IMF), stating that economic growth is the only way forward in providing jobs, widening the tax base, and generating wealth to correct the fragile and anaemic economic conditions in Europe with few exceptions, and to a lesser extent, the United States. This is particularly true for poor and developing countries of Africa, Asia, the Caribbean and Latin America that were kept back for too long by the multilateral agencies and rich nations pushing aid as the answer to their dilemma.

When those of us advocated low interest rates and grant financing for developmental projects in these struggling countries, we were dismissed as 'socialists' wanting 'the haves' to finance 'the have-nots' out of their poverty, which 'they were responsible for anyhow through laziness, ignorance and their inability to rise to the levels of the white people'.

In a report carried recently in the Jamaican press, Luis Breuer, the IMF's mission chief for Jamaica, stated that for the country, "the recovery is fragile and there are strong downside risks". Jamaica's economic growth, he said, is projected to remain low at about one per cent per annum, and at present trends, the public sector and external current account deficits will widen and the public debt rise, with unemployment at 12.8 per cent, and the country's fiscal situation "deteriorating".

In a recent speech at the Brookings Institute in Washington, DC, Christine Lagarde, managing director of the IMF, called on policymakers around the world to "focus on growth", as the risks to a global economic recovery remain, and more must be done to stave off an economic collapse. Monetary policy, she said, "can support growth where inflation remains in check, and in terms of fiscal policy the imperative in many countries is to restore sound public finances".

I was, therefore, disappointed with a recent announcement from the Ministry of Finance that an 'economic council' is being established comprising economist Dennis Morrison, who already sits on two boards of directors and chairing at least one; Shirley Tyndall, a retired civil servant and financial secretary, and Colin Bullock, a former Bank of Jamaica deputy governor and current University of the West Indies lecturer. All very bright people, but does any of them have experience running a business? With all due respect to them and my friend, Finance Minister Dr Peter Phillips, what Jamaica desperately needs is execution of policies promoting growth and development, not more counsel, exploration and proposals. These are all over the place piling up, growing dust, and like mine, paid no attention to.

The country must now enter a 'things-we-are-doing' mode. While tons of mangoes, pineapples, otaheiti apples and other foodstuff go to waste every year, unable to find markets in Jamaica, dried fruits like mango, banana and pineapple coming from
countries such as Mexico, Malaysia, and Costa Rica sell in New York for
prices from US$14 to US$69 per pound. Dried pepper fetches as much as
US$53.52 per pound. Jamaica has a brand recognition and social and
cultural capital far surpassing almost every country on earth, but the
country's leadership fails miserably to put these to the benefit of the
shareholders of Jamaica: its citizens.

In a response
from a reader to my article of January 29 in The Sunday
Gleaner titled 'Wanted: development czar for Jamaica', the
individual stated that the prime minister should be the development
czar. While the prime minister, as the minister for development, has a
crucial role to play, the day-to-day job of managing the Jamaican
economy must rest in the hands of one who has the experience, and vision
of managing big business.

Another reader sent an email asking why I
propose capitalisation of US$200 million, and not US$500 million, for
the Develop Jamaica Initiative. My experience is that most Jamaican
businesses in need of financing do not require as much as US$1 million. A
few will require more. But Jamaica would show dramatic development if
100 businesses receive an infusion of capital averaging $1 million each
over a two-year period to begin with. Furthermore, the Initiative would
provide some, but not all, financing needed by the
business.

For Jamaica to prosper, it must be
administered like a big corporation, with the specific role of Prime
Minister Simpson Miller being to inspire the Jamaican people, the
shareholders, to work together to achieve increased production and
productivity, and to sell the policies and direction of the country to
international and local investors. The Parliament is the country's board
of directors, and the Cabinet, its officers charged with the day-to-day
operations of the country.

And the paramount
stratagem is to grow and develop the country's economy, with a
development czar, and his or her team's sole responsibility to achieve
set targets laid out by the public-private sector body comprising
representatives from key sectors of the Jamaican society, to oversee
this initiative. The objective of achieving First World status by 2030
is doable, but requires vision and effort with a sense of national
purpose and unity. The prime minister is, I believe, qualified to lead
this undertaking, but she must identify her role and move speedily to
play it optimally.

Julian 'Jingles' Reynolds is a
writer, filmmaker and entrepreneur with 45 years' experience operating
in Jamaica and the United States. Email feedback to
columns@gleanerjm.com and
fiwipro@yahoo.com.