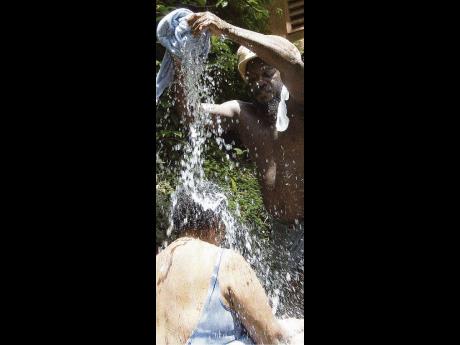 'Love and success!' shouts Jah Truci, the bath mayor, as he gives a cleansing to one of his 'patients' at the Bath Fountain in St Thomas. - File 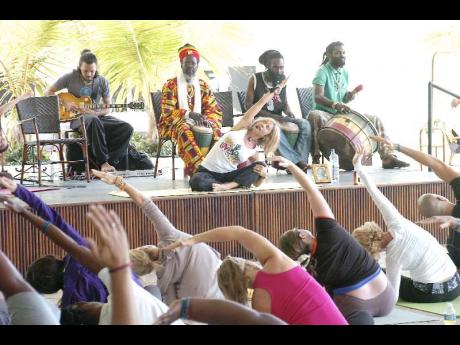 With the capacity to generate in excess of US$35 billion per year, health tourism appears to be a viable income-generating option, which, if pursued, could bring vast sums into the country's coffers.

"There is a lot of potential for health tourism in Jamaica," said Dr Wykeham McNeill, minister of tourism and entertainment.

"Numerous persons have shown interest and we are working closely with the Ministry of Health and the Ministry of Investment, Industry and Commerce - in particular, Jampro - to ensure that we put in place a health-tourism policy to grow this area," added McNeill during an interview with The Sunday Gleaner.

According to McNeill, Jamaica has a clear advantage over many other countries, with its offering of natural spas like Bath Fountain in St Thomas and Milk River in Clarendon, but these areas need serious investment to reach world-class standards.

"Treating persons from overseas also has big potential, and we have a distinct advantage given our proximity to the US. The fact that we speak English and have some of the best health professionals in the world is certainly an advantage." he added.

Among the major players in health tourism at this time are countries such as India, Singapore, Thailand, and Cuba, which currently earn a significant sum from the lucrative market.

Years ago, MoBay Hope, a private medical centre in Montego Bay, St James, was the place to go for plastic surgeries. People from all over the world came to Jamaica to access the service.

"We have not offered that service for the past six or so years," Nichola Francis, MoBay Hope's commercial and marketing representative, told The Sunday Gleaner, "We still have a very large number of tourist clients, but those are mostly guests at our hotels, who we attend to on an emergency basis."

Francis chose not to comment on the prospect of her company resuming the service if health tourism becomes a national policy.

The tourist capital also has other world-class facilities like Montego Bay Hospital along with Doctors' Surgi-Clinic, and Cornwall Regional Hospital to a lesser extent.

Renowned specialist surgeon Dr Geoffrey Williams, who operates Doctors' Surgi-Clinic, told The Sunday Gleaner that there is tremendous potential to capitalise on this growing and lucrative branch of tourism.

"Jamaica could emulate the Far East by setting up centres that offer the same range of services. They (Far East countries) have put in resources which do not limit them to plastic surgery. They do open-heart surgeries and gynaecological services in palatial settings that they have set up," he said.

Williams explained that operations done here would attract a fraction of the cost that it would incur in a First-World country.

According to Williams, a patient can spend up to US$10,000 in hospital fees in the US, while they pay as low as US$2,000 at a local facility.

"It still suits them to pay the airfare and spend a couple days to recuperate, and it would still cost them anywhere between 50 to 70 per cent less than it will cost in the United States."

The veteran surgeon has been tapping into this niche market by offering plastic surgery, breast augmentation (lift), breast reduction, tummy tucks, and liposuction to visitors from the US, Europe and the Caribbean.

The clinic houses a fully equipped operating theatre that accommodates most surgeries, and is specifically designed to give a feeling of openness.

Not the typical sterile or claustrophobic environment operating theatre, it offers a pleasant backdrop of a lovely landscape dotted by palm trees, and a view of the cruise ships docked at the Montego Freeport Terminal.