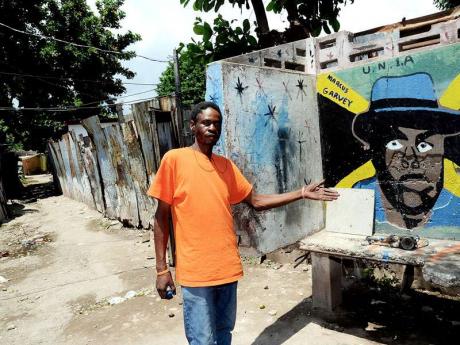 Deon Malcolm, a resident of 'Frog City', points to an area that was once a dump in the the community. 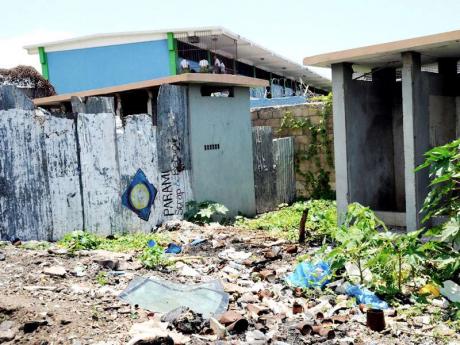 The offensive smell of faeces hung like a thick dark cloud over the Corporate Area community residents call 'Frog City' but which could easily be called 'Filth City'. The community, located off Maxfield and Chisholm avenues, is correctly known as Ricketts Crescent but for anyone familiar with the area, it is 'Frog City'.

When our news team visited the area recently, the offensive smell was everywhere and so were the black scandal bags in which full or half loads of faeces had been tossed close to the playing field of the Norman Manley High School and into makeshift garbage pits; garbage heaps, or the open areas in sections of the community.

Running water is scarce and sometimes non-existent in the inner-city community.

Public toilet and bathroom facilities constructed about a decade ago to offer some dignity to the men, women and children are no longer usable after they were vandalised.

Flies, people and animals commingle in a maze of nastiness. When the wind blows, the residue of filth is felt all over your body including in your mouth.

Flies quickly move from the mounds of filth to the mouths of adults and young babies.

Worldwide, rats and mice spread over 35 diseases. These diseases can be spread to humans in many ways, she told a recent meeting of the KSAC Health Department.

In 'Frog City', that is a risk that the residents live with every day.

Wayne Henry, garage owner and operator, is threatening to fill up the makeshift garbage hole located near his garage, to prevent a complete rat infestation.

"I personally take up the filth with shovel and bury it. Other people just toss their mess in bags and drop them anywhere, even on housetops," Henry told The Sunday Gleaner.

He said rats were everywhere but were mostly visible in the evening and nights.

Community animals foraged through garbage housed in what was a sewer pit, but which now serves as one of the garbage dumps while residents wait on the National Solid Waste Management Authority (NSWMA) trucks which visit infrequently.

That agency has already admitted that it does not have enough trucks to help residents in this seemingly forgotten community.

"We have managed to control that problem somewhat with an additional garbage skip. We would really love for the truck to come twice every week instead of once," he said.

Along the wall that separates the school playground from the wider community, the stench of faeces slaps you in the face.

"It is not so bad now. Sometimes the downstairs classrooms along a particular block would be infested with the smell of filth as faeces would be out in the open along the wall and we would have to clean it up," said Francis.

The school was forced to construct a perimeter wall to prevent free-for-all access through the compound. This has reduced the amount of garbage disposed on the school compound by the residents who 'parachute' their bags of human waste over the wall.

He said the Pan American Health Organisation in 1997 handed over 12 showers, 18 toilets, six toilets and washroom combination and three urinals to the residents of the community.

By 2002 they were in a state of disrepair, malfunctioning and completely vandalised.

"The toilets started to malfunction shortly after they were commissioned to use. I think the issue was with faulty plumbing, because if one toilet backed up, all the toilets on that line blocked up, and also the cisterns.

"Eventually, the whole thing malfunctioned, and now there is nothing," Malcolm said.

Another set of bathrooms was constructed about 100 metres south of the vandalised bathrooms and the majority of them has malfunctioned.

Ruby Reid, who is caretaker for the facility, said residents are to be blamed for the breakdown.

According to her, residents were asked to contribute even $20 for water they could use for washing.

"Not even that they would do. So NWC disconnected the water," Reid said.

She agreed that the infrequent garbage collection is contributing to the rodent infestation in the community.

Lindon Campbell has lived in the community for many years.

"Two skips used to be here. But because the garbage trucks take so long, people started to burn the garbage in the skips. After a while the skips burn up, and people keep garbage in their house until the truck come or they dump them here," he said.

Residents hope that the community will not be forgotten when the drive to rid the Corporate Area of rats begins.