Bringing the trains back to Kingston 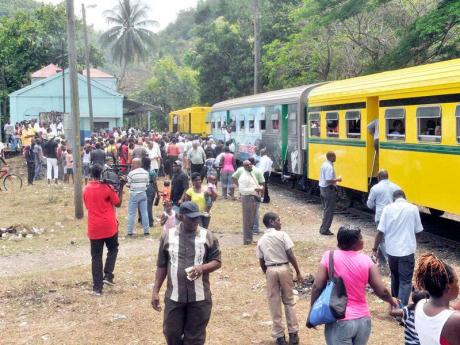 Residents of Bog Walk, St Catherine, converge at the local train station for a closer view of the reconditioned five-coach train, on its test run from May Pen, Clarendon, to Linstead. - File

Last October, I wrote in this newspaper about a marvellously evocative railway journey I made from Spanish Town to Linstead on the newly restored passenger train service. Let me say, first of all, how pleased I am that this service has been maintained up to now. It is a first, symbolic step towards the restoration of the entire Jamaican railway system.

Following that episode, and being a newcomer to Kingston, I made a point of visiting the now sadly derelict Kingston Railway Terminus, and the thought occurred to me that it would be a tremendous boon to the whole downtown area if the railway were to return to Kingston, with the station as the transportation hub of the city.

The excellent article, 'The Making of a city', recently published on your pages, with which I agree wholeheartedly, reminded me of the importance of the railway to the urban development of Kingston, and to its promotion as a vibrant and beautiful capital city.

The concept of the railway station being the 'centre of the city' is well established in Europe, the continent where railways are woven into the fabric of society, and where railways are regarded as social services in much the same way as schools and hospitals. Take, for example, the Italian city of Bologna, known variously as 'La Rossa' (for its 'red', left-wing politics),'La Dotta' (for the educational renown of its university, the oldest in Europe), or 'La Grassa' (for the richness of its food, including 'spaghetti bolognese'). Travellers to Bologna from abroad may arrive at the airport, where they take a shuttle bus to the city centre (the railway station), and there catch a train to another town, or board a local bus or taxi to a destination elsewhere in the city.

In the immediate vicinity of the station are innumerable hotels and restaurants, and on Saturday mornings, local football fans congregate at the station to catch trains to other towns for 'away' matches. I use this merely as an example of how a railway terminus can serve as a catalyst for all manner of benefits for the general public, and be regarded as the very 'heart' of a city.

In the same vein, what a pleasure it would be for visitors to Kingston from other towns and villages in Jamaica - from as near as Spanish Town or as far as Montego Bay - to arrive by train, in comfort and without the stress of a long road journey, in the heart of Kingston, from where they could take a bus or a taxi to their ultimate destinations, and return home in the same manner!

There seems no doubt that Kingston would be transformed if the railway trains came back. Let us hope that the Government will find willing foreign investors to assist with that transformation. Such investment may not be easy to obtain at this time but, if the political will is present, who knows what may be achieved?