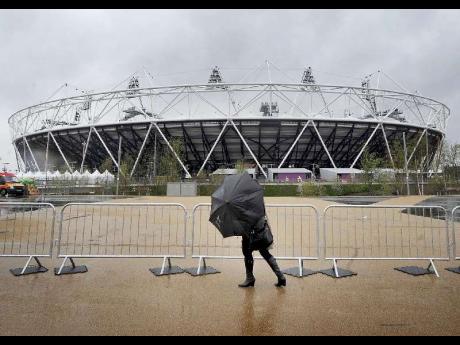 A woman struggles with an umbrella as the heavy rain falls outside the Olympic Stadium, in London last Wednesday. - AP 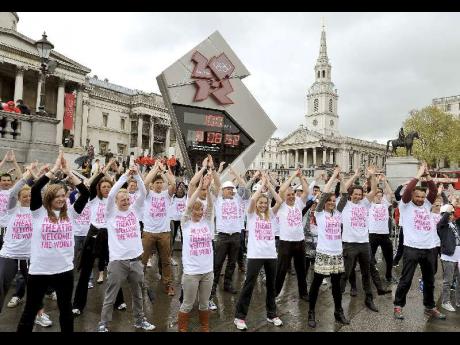 West End theatre workers and performers dance in front of the Olympic countdown clock to mark the 100-day countdown, in Trafalgar Square, central London, last Wednesday. With 100 days to go until the 2012 London Olympics, the city's theatre community is increasingly confident that culture won't suffer during a summer devoted to celebrating sport. - AP
1
2

West End producers had been apprehensive that the 2012 London Olympics could deter people from travelling to London or visiting its central entertainment district at the height of the summer tourist season.

Composer and impresario Andrew Lloyd Webber had earlier even predicted a "bloodbath", saying that several shows could likely shut down during the July 27-August 12 Olympics.

That's not the feeling now.

"There's a fear factor - you don't know what it's going to be like," West End producer Nica Burns said last Wednesday. "None of us in London theatre have experienced London during the Olympics. Neither have the people who run the transport system or the city as a whole."

But Burns said the theatre community had forcefully argued its case to Olympic organisers and London authorities, who have pressed to inform tourists of all the non-sporting delights that Britain's capital has to offer.

"The theatre will always fight to keep its corner, and that's exactly what we did," she said.

Olympic organisers marked the 100-day countdown last Wednesday with a West End pep rally in Trafalgar Square, where dozens of theatre performers danced energetically in a typically London blend of sunshine and drizzle.

With Britain's economy still sluggish after a recession, businesses in London are anxious about the effect of the games - hopeful but uncertain of an Olympic tourism boost.

Burns said the biggest remaining unknown is how well London's public transport system will hold up under the onslaught of Olympic visitors.

"If the transport doesn't work, can I recommend very strongly walking?" she said. "All the theatres are very close to each other."

Actor Deka Walmsley, who plays the title character's coal miner father in the London production of Billy Elliot, was among the performers encouraging visitors to take in a show during the games.

"Come, see some sport, see a bit of theatre - it'll be brilliant," he said. "Hopefully, it won't be raining."