The flag foul-up fiasco - A story of lies, denials and fall guys 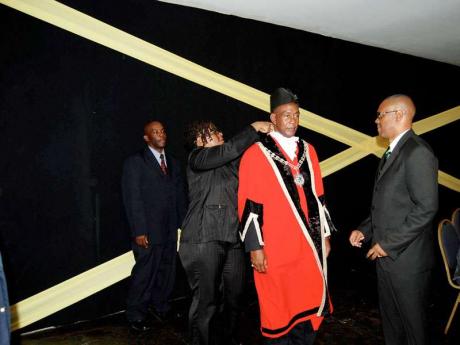 Incoming Chairman of the St James Parish Council Glendon Harris being robed at the installation ceremony which has become infamous for the misuse of the flag-colour backdrop in background. To Harris' left is the outgoing mayor, Charles Sinclair Jr. - Contributed 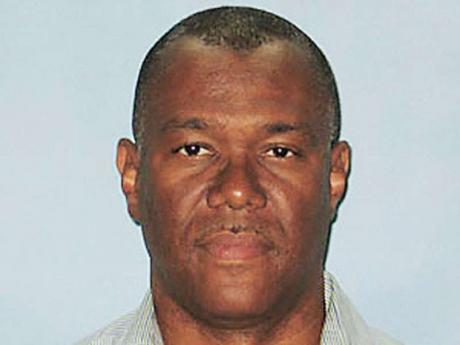 Like most major scandals, the 'flag foul-up fiasco', which evolved out of the recent swearing-in ceremony for Montego Bay's new mayor, Glendon Harris, has been chockfull of intrigue, denials, half-truths, lies and maybe even fall guys.

Initially, the concern was a civic one, as persons who attended the ceremony took objection to what appeared to be the misuse of what should have been the Jamaican flag as a backdrop at the ceremony.

The backdrop was done in such a way that while the black and gold were present, there was no green.

Seizing the occasion, the Jamaica Labour Party (JLP), whose primary colour is green, transformed the issue from a mere civic misdemeanour into a case of political 'cass cass'.

The JLP charged that the absence of the green in the backdrop was a partisan act by the governing People's National Party (PNP).

"Based on our investigation, we know it was deliberately done," said former Montego Bay mayor, Charles Sinclair, the minority leader in the St James Parish Council.

"It was no accident, it was deliberate," added Sinclair even though he made no mention of his taking part in the ceremony and robing the new mayor in front of the 'inappropriate' backdrop.

With civil society and the JLP taking issue with the missing green, Harris advised the nation that he would be making a statement at the first sitting of the council to clarify what happened and put the matter to rest.

At that meeting, Harris stated that based on his investigations, the decorator Denton Edwards had run out of green material and had accepted blame for the foul-up.

"He (Edwards) accepted blame for what happened and has promised to make a public statement accepting responsibility," declared Harris.

"As a gesture of his goodwill, he has even agreed to refund the money ($30,000) that he was paid for the function."

Harris then argued that some persons were seeking to gain political mileage out of the matter, but declared that he was done with it and would not be making any additional public statements.

Within hours of that announcement, Edwards released a statement denying that he had accepted responsibility for the foul-up and that he would refund his fee.

He further denied that he had run out of green cloth, stating that Courtney Hume, whom he had been told was a protocol officer at the western Office of the Prime Minister, had stopped him from completing the job.

"I was instructed by a Mr Courtney Hume, protocol officer of the Office of the Prime Minister (OPM) Western, to forgo the completion of the green in the interest of time, to which I complied," Edwards said.

"I wish to note that there was no shortage of green cloth to complete the task and I would have been able to complete the backdrop depicting the Jamaican flag, if I was afforded the opportunity so to do."

The controversy deepened in the aftermath of Edwards' statement, as minister with responsibility for information, Sandrea Falconer, denied that Hume was employed to the OPM and had authorisation to be involved in the planning and execution of the ceremony.

"The Office of the Prime Minister (OPM) wishes to advise that Mr Courtney Hume is not employed to the OPM either in Kingston or in Montego Bay.

"In that regard, Mr Hume, does not have any authority to give instructions on behalf of the OPM," Falconer stated.

"The OPM had no knowledge of or any part in the arrangements for the civic ceremony in Montego Bay for the swearing of the mayor and councillors," added Falconer added.

That claim was rejected by the JLP councillors in the St James Parish Council, who called a press conference to present what they said was irrefutable proof that Hume was connected to the OPM.

The JLP caucus noted Hume was assigned a government vehicle which is registered to the Department of Co-operatives & Friendly Societies - an organisation located at OPM (West).

The JLP councillors further charged that Hume was assigned as protocol officer at OPM and was on probation for three months.

They added that Hume represented himself as a protocol officer to Winston Palmer, the secretary/manager of the council, who yielded control of the organising of the event to him.

In declaring that Falconer and Harris had not been candid in their statements given to the media, Sinclair called on Local Government Minister Noel Arscott not to confirm Harris as mayor of Montego Bay and for Prime Minister Portia Simpson Miller to review Falconer's position.

"Mr Harris' action or lack thereof, has sullied the noble office of mayor and the good name of the St James Parish Council," claimed Sinclair.

Sinclair further charged that, as the government's chief spokesperson, Falconer's credibility was brought into question in her denial of Hume's involvement at the OPM.

"This puts into question the veracity of the denial of Minister Falconer, who has demonstrated a tendency to misinform the public on important issues."

In a belated response, Arscott issued a public apology.

"On behalf of the Government of Jamaica, I wish to express my unreserved and sincerest apologies to the Jamaican people for the inadvertent misuse of the colours of the Jamaican flag at the recent swearing-in ceremony of the newly elected mayor of Montego Bay," said Arscott.

He noted that Hume had no authority to insert himself in the organisation of the swearing-in ceremony.

"I wish to assure the Jamaican people that a full investigation is being carried out, and the chips will fall where they may," said Arscott as he announced that he instructed the Municipal Services Commission to investigate the role and responsibility of the secretary/manager, and his staff in the matter.

While that played out, persons close to the St James Parish Council argued that had tradition being followed, the flag controversy would not have arisen.

"The parish council has red and blue as its official colours and had tradition been followed, those colours would have been the colours used for the backdrop," The Gleaner was told.

While Hume has been ushered into the background with his resignation from his post as special advisor to State Minister Sharon Ffolkes-Abrahams, Edwards is charging that he is paying the price for not accepting the role of "fall guy" in the saga.

"This incident is affecting me in a negative way and I am not happy about it," Edwards told The Gleaner.

"I am constantly being bombarded by the media for interviews, and I am not enjoying all this attention.

"Some people are portraying me as a kind of wicked witch while others are saying that I cause a man (Courtney Hume) to lose his job," added Edwards. "I did not do anything wrong … all I did was speak the truth about what happened."

With civil society still angered by the misuse of the flag colours, the JLP peeved by the so-called 'dissing' of the colour green, and the PNP in damage control gear mode, the flag fiasco appears to be far from dead, with several unanswered questions.

Persons in St James in particular are waiting on Harris to respond to Edwards' claim that it was not true that he had agreed to take responsibility for the 'flag foul-up' and agreed to refund his $30,000 fee for the function.

There are also questions surrounding the secretary/manager of the council who is now the subject of an official investigation over his seeming decision to relinquish control of the swearing-in ceremony to Hume.

The plot thickens, as the secretary/manager has since retained the services of a lawyer and has submitted his report to the Ministry of Local Government.

An investigative team from the ministry was also sent to the St James Parish Council.