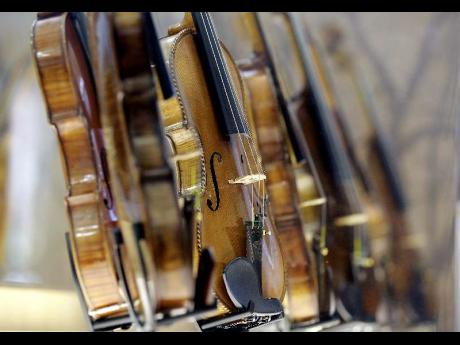 In this April 9 photo, violins are shown on display at the Violins of Hope exhibit at the University of North Carolina in Charlotte, North Carolina. - AP 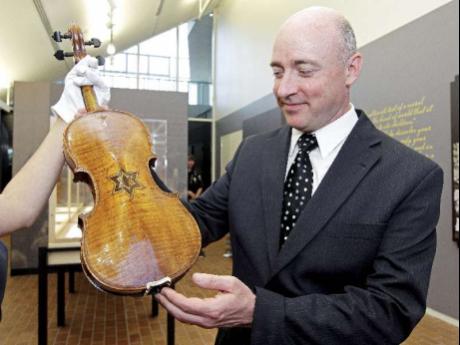 In this April 9 photo, David Russell, distinguished professor of violin at the University of North Carolina, examines one of the violins on display at the 'Violins of Hope' exhibit at the university in Charlotte, North Carolina. - AP
1
2

When a musician plays a violin long enough, the instrument is imprinted with its owner's way of making sound. If someone else picks it up, they learn to play it in a way that honours its history.

So when David Russell places a violin played in the World War II concentration camp of Auschwitz under his chin, he lets the violin tell him how to do it. The Auschwitz violin and 17 others with connections to the vanished world of Europe's pre-war Jewish communities are part of a new exhibit and performance series called 'Violins of Hope'.

"When the violinists in 'Violins of Hope' play these instruments and they find how to make these instruments sound their best, they're actually bringing back patterns from the former performers who used to play them," said Russell, a music professor at the University of North Carolina Charlotte. "So we get an imprint, as it were, of that person. They're with us, they're in the concert."

'Violins of Hope' is on at UNC Charlotte Center City and will remain on view through April 24. The programme includes related exhibits at other museums and several performances using the violins. The project's final concert will take place April 21 at the Charlotte Symphony, with noted violinist Shlomo Mintz taking part.

The violins were first played publicly in 2008 in Jerusalem and then exhibited and played in 2010 in Sion, Switzerland. They've never before been exhibited or played together in North America.

Some violins were played at concentration camps; others were used to play klezmer music, a lively, soulful Jewish folk music popular in pre-war Eastern Europe. The Holocaust all but extinguished the klezmer tradition but it's had a revival in the United States in recent decades.

All the violins were restored by master violin maker Amnon Weinstein, 73, who says the violins provide a way to teach young people about the Holocaust, in which about six million Jews and five million others were murdered by Nazis.

"It's very important. I hope people will understand," said Weinstein, who believes 400 of his family members died in the Holocaust, though his parents survived by moving to Palestine in 1938. "You cannot bring in dead people. But the violins speak for the people."

Weinstein began the 'Violins of Hope' project in the 1990s, but the genesis dates back to the end of World War II. His father, Moshe, also made violins. At the end of World War II, members of the Palestine Philharmonic Orchestra began bringing their violins to Moshe Weinstein with this directive: Buy my violin or I will destroy it.

The reason: Many of the violins were Germany-made and the musicians wanted nothing else to do with them after the atrocities of war. Moshe Weinstein bought the violins, which stayed in his shop until his son had an idea.

Amnon Weinstein understood that those violins had saved the lives of those musicians and their families. The orchestra's director, Bronsilaw Huberman, had brought over hundreds of Jewish musicians from Europe to play before the war. Those who stayed in Israel survived. Those who returned to Europe were never heard from again.

He restored first one violin, then another. People learned of his project and contacted him, offering their instruments.

The project also is a way to take back ownership of the violins from the Nazis, who perverted music to their own ends. They used music "as a weapon against these people, psychologically, emotionally and spiritually", Russell said. "They made the prisoners in the concentration camps play happy music for public executions and as people were being marched to the gas chambers.

"While it's unthinkable to use music in that way, it also provided these people even momentary escape from the hell they were living in, where they could still glimpse a few minutes of beauty and remember a time before all that darkness set in."

And the music saved the lives of some of those musicians, who weren't gassed because they could provide a service for the Nazis.

While Weinstein has restored more than 30 violins, Russell decided on 18 for the Charlotte exhibit because the Hebrew word for 18, chai, also means life.

Weinstein also has a few violins that he will never restore, including one he got about six weeks ago from a bow maker in Washington, DC, who bought the instrument from a rabbi with the intention of restoring it. When he opened the violin, he found 'Heil Hitler 1936' and a swastika scratched in the wood.

The bow maker offered it to Weinstein with much the same threat as those musicians delivered decades ago to his father: Take this or I will burn it.

"Send it to me as a gift, and the violin will stay open for eternity, never to be restored," Weinstein responded.

The person who defaced the violin thought his aggressive scratches of hate would never be seen. "But it was such a degree of evil that they wanted this Jewish person to be playing a violin that in its soul was saying 'Heil Hitler' and had a swastika," Russell said. "So that one deserves to never be played again."