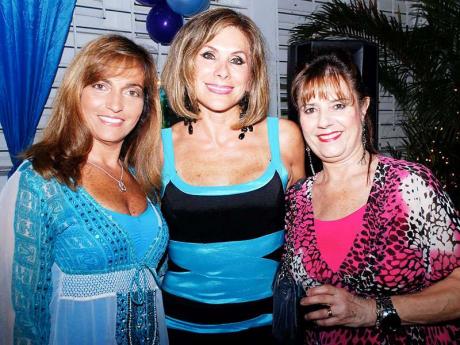 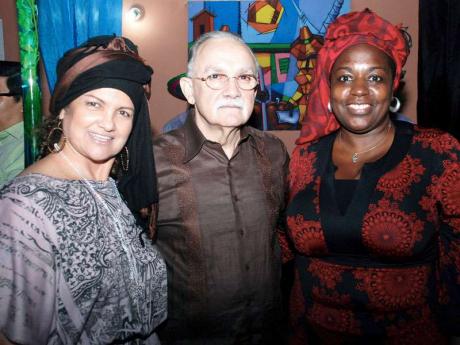 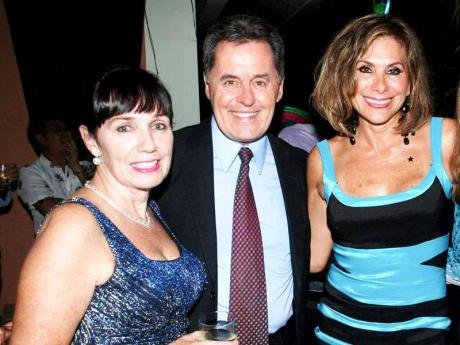 Canadian High Commissioner Stephen Hallihan is in a good place with his wife, Cathy, on his left and Ambassador Leonora Rueda on his right.
1
2
3

She was one of the most liked foreign diplomats in Jamaica during her tour of duty, and when she left some nine months ago, there were many unhappy friends behind. So it was not surprising that following her recent trip home to Mexico, that country's former ambassador, now posted in New Zealand, stopped for some rest and relaxation in Jamaica.

She spent close to a week reuniting with friends before departing Kingston for New Zealand on Saturday, April 14.

And among the highlights of her stay was a party given in her honour by one of her closest friends, businesswoman Rosa Joseph. In spite of the heavy downpour that forced several location changes, the party was held in the garden of Joseph's Cherry Gardens residence. Among the 45 guests in attendance were members of the diplomatic, consular and business communities. Bartenders sported colourful straw hats and decor featured huge flutes with orchid petals afloat in aqua coloured water.

Joseph kept herself busy personally welcoming guests, ensuring their comfort and ensuring that upon arrival they got a photo op with the guest of honour. For her part, Ambassador Rueda was the essence of charm and grace, showing obvious delight to see each friend or colleague after so long.

They all welcomed her "home" and it was sot surprising as she told Outlook how much the missed Jamaica. "The landscape is beautiful, there is zero crime and it is among the least corrupt places in the world, plus it is a developed country but I miss Jamaica," Rueda said. Among the things she missed most are the sound of the reggae music, the warmth of the Jamaican people, the friendly gossip among friends, the noise of the atmosphere and the warmth of the sun. So in spite of the two days' travel back and forth, she will be back again.

Catering was by Tania Dabdoub, decor by Rosa Joseph and Stephen McDonald and the pulsating music was by Sapphire Disco's DJ Omar C.