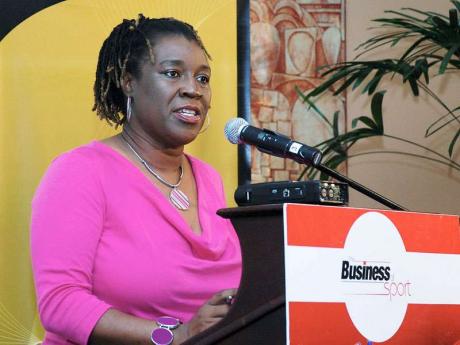 Carole Beckford, member of the organising team, speaking at the Business of Sports media launch in March. - Colin Hamilton/Freelance Photographer

Organisers of the 'Business of Sports' conference, which is scheduled for The Jamaica Pegasus on May 3 and 4 have gone all out to improve the product; increasing the level of access to the event with the option of live streaming and a deep and impressive list of presenters.

"We are going to charge a very nominal fee but it will be available to just about everybody," said member of the organising team Carole Beckford, who also added that Flow will be providing the technical support for the streaming facility and Internet access at the conference.

Sixteen international presenters, ranging from former sports personalities, broadcasters and high-level attorneys will make presentations over the two days and after months of extensive evaluation following last year's instalment, Beckford, believes that the group represents expertise in the areas and fields that have the greatest interest among participants and as a result, is expecting an even greater response from the public this year.

"We did a lot of evaluations, we found out what people needed to hear about and these are the areas that we are focusing on this year," said Beckford.

"One of the most important things, I think, is the psychology of sport continuing from the workshops we had because there are a lot of talented athletes all over the world, but it's who has the competitive edge," Beckford added. "What we have assembled is 16 or 17 main speakers that I think have zoned into the areas, which we are looking at this year."

"We will actually hear from some athletes who were successful in their respective areas and have gone on in their respective businesses but what they will do is essentially tell us how they experienced it all the way through," said Beckford, who is also an author, sports lecturer, sports-tourism advocate and publicist for double Olympic gold medallist and world-record holder Usain Bolt.

Beckford also pointed to what she described as an increased local awareness around the value of the need to establish and maintain a vibrant sport business industry.

"I think we are beginning to see the light, what we need to do now; because it is such an intangible, we need to create a formula that calculates the value of an athlete and how they can benefit. That has eluded us, while we continue to produce the fabulous sportsmen and women. We have to make a business model that will see them converting all their years of competing into some hard-earned cash," Beckford stated.