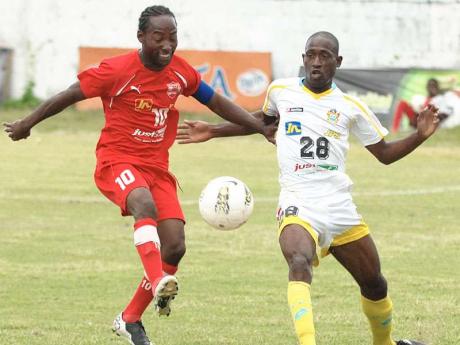 With Portmore United just a point away from claiming the 2011-2012 Red Stripe Premier League, something they should achieve tomorrow with a draw against Humble Lion, today's games are largely about the minor places.

Second-place Boys' Town may be harbouring thoughts of performing the improbable feat of overhauling Portmore United but any result other than a win for them today would hand Portmore the title.

Mathematically, they still have a chance but with three matches to go it is unlikely that Portmore United will finish pointless. What would also have to go in Boys' Town's favour is goalscoring. Currently, the 'Red Brigade' as Boys' Town are dubbed have an inferior goal difference of 10 to Portmore United and have rarely scored more than two goals in a game.

Boys' Town's opponents today, defending champions Tivoli Gardens, will not be demonstrating any neighbourly love for them if assistant coach Alvin Shaw is to be believed. Shaw maintained at the start of the fourth round that second place was their major target.

"Our focus is second place where there is an incentive, so that is another reason why we are going to Portmore and give it our all," said Shaw.

"This is another tough game. They (Boys' Town) will be coming to our home. It is another game that we are going all out for. We know it is going to be another difficult one but our objective at the moment is to accumulate maximum points and see where it takes us at the end of the season," Shaw said ahead of today's game.

Shaw's statement was consistent with the approach of Tivoli Gardens to their game against Portmore United where they took the charge to them especially in the first half. Also of importance to Tivoli Gardens is financial reward. The higher up the table teams finish, the more money they collect at the end of the season.

Tivoli Gardens looked good against Portmore United with Mario Swaby, Dane Kelly and Keithy Simpson in particular playing well. They will again want to send a message to the other teams by locking up second place.

If Boys' Town are to pull off a victory and delay the inevitable they would need to get the best out of key players such as captain Michael Campbell, Renae Lloyd and goalkeeper Kirk Porter.

In other games on today, the rejuvenated Harbour View will travel to Drewsland to meet Waterhouse but will be without the services of their brightest current talent, forward Jermie Lynch and could just be edged by Waterhouse if they are at their strongest. Waterhouse are expected to be at their strongest as they too can claim second place.

Montego Bay United and Highgate could put on a treat for their fans to a lovely game of football as the local Brazilian coach Geoffrey Maxwell leads his troops to battle against Brazilian Neider dos Santos and his charges at Montego Bay United.

Arnett Gardens should give the youngsters another run out when they take on the relegated Reno while Village United, the other relegated team, will try to give their loyal fans a winning gift before their descent to the lower leagues. Sporting Central, secure in the fact that their safety is assured, may not have much interest in this game.

On Monday, Portmore United should lift the crown on their home ground when they host Humble Lion in the Monday night feature. A draw should be enough for them but the home team could get all three points with a win.