Blast Them Away slams rivals 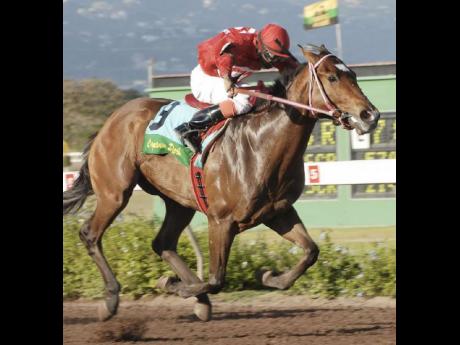 BLAST THEM AWAY, one of three winners for leading jockey Dane Nelson, wins the $1-million King's Plate feature over 1500 metres at Caymanas Park yesterday to be unbeaten in seven starts. The American 3-y-o colt was a 3-5 favourite in a field of 11. - Colin Hamilton/Freelance Photographer

The impressive American 3-y-o colt BLAST THEM AWAY stretched his unbeaten run to seventh at Caymanas Park yesterday, thanks to a decisive victory under topweight in the seventh running of the King's Plate open allowance feature over 1500 metres.

Installed a 3-5 favourite in a field of 11, BLAST THEM AWAY, ridden as usual by leading jockey Dane Nelson for champion trainer Wayne DaCosta, circled long-time leader and stable-companion RIO COBRE (15-1) entering the straight, then kept on strongly under the left-hand stick to hold the lightly weighted American colt REASONABLE PRESS (2-1) under champion jockey Dick Cardenas at bay by 11/2 lengths.

Settled in third as RIO COBRE led comfortably from CLASSIC BEAU (26-1), BLAST THEM AWAY was sent in chase of RIO COBRE at the half mile, caught up with him approaching the home turn and carried the big weight (57.0kg) really well to record his third win from as many starts this season in the red-and-white silks of owner Robert K. Thomas.

Voted the champion two-year-old of last season by virtue of winning four races on the trot, BLAST THEM AWAY showed how much he had trained on by winning the Ash Wednesday Trophy overnight allowance feature over 1300 metres in fast time on February 22.

As a result of this victory, the bay colt by Proud Accolade out of Evita Villa has not only pushed his career earnings past the $3 million mark, but has graduated to grade-one company where he will soon match strides with the likes of reigning 'Horse of the Year' ST CECELIA and the 2010 champion MARK MY WORD.

However, DaCosta is not fazed at the prospect of meeting them in the months ahead.

"He's probably the best horse in the island," he boldly declared. "He has tremendous scope as a young horse and I expect him to get better and better as the months progress," added the 11-time champion trainer.

DaCosta, who confirmed that he will have two runners in next Saturday's Bigga Oaks over 2000 metres - EXOTIC GOLD (Dane Nelson) and ANTOINETTE (André Martin) - posted a second winner on the card in even-money favourite SOCA PARTY in the eighth race over 1200 metres for $180,000 claimers.

Nelson, who rode both SOCA PARTY and BLAST THEM AWAY, had a third winner in 3-5 favourite MR SKILL for trainer Lawrence Freemantle, the speedy gelding making all impressively over the round-five course for his third win from four starts this season.