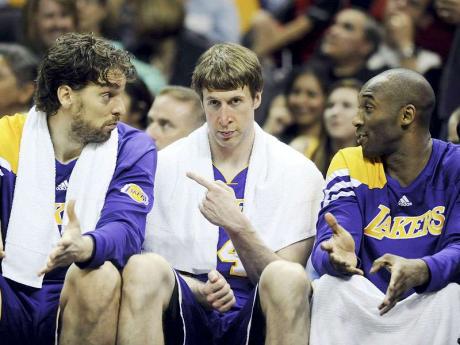 Los Angeles Lakers players (from left) Pau Gasol, Troy Murphy and Kobe Bryant, talk on the bench late in their NBA game against the San Antonio Spurs on Friday night in San Antonio. The Spurs beat the Lakers, 121-97. - AP

The San Antonio Spurs' stars made sure Kobe Bryant's return wasn't a triumphant one.

Tim Duncan, Tony Parker and Manu Ginobili all scored at least 20 points to help San Antonio beat the Los Angeles Lakers 121-97 on Friday night and remain atop the Western Conference.

Bryant, who had missed the previous seven games with a bruised left shin, scored 18 points on 7-of-12 shooting.

The Lakers went 5-2 without the NBA's scoring leader, but with only two games left in the regular season for Los Angeles, Bryant returned as he aims to get into a rhythm before the playoffs begin.

Bryant wore a black sock over his lower left leg, with a padded sleeve protecting the injured area. While the Spurs said after the game that he's not the old Bryant just yet, he's not so sure.

"I'm back now,'' Bryant said. "It took me a half. The second half, it felt like I was back in a good rhythm. The game just got away from us.''

The Spurs (46-16) won their sixth straight game and remain a half-game ahead of Oklahoma City for the No. 1 seed in the West. The Lakers (40-24) missed a chance to clinch home court in the first round of the playoffs.

These teams could meet in the opening round, and judging by their latest meeting, it would be a mismatch.

San Antonio have handed Los Angeles their two worst losses of the season, Friday night and 112-91 on Tuesday. Duncan had 21 points and eight rebounds, Parker had 20 points and 10 assists, and Ginobili added 20 points and seven assists on Friday.

San Antonio broke the game open in the third quarter, when Bryant played his best. The Lakers' star hit five of six shots in the quarter, directing his teammates on offence and yelling at them to "D-up'' on defence.

It hardly mattered, though, as he was repeatedly on his heels on defence as the Spurs pushed the ball. San Antonio outscored Los Angeles 35-21 in the quarter.

While Bryant was sidelined, several Lakers increased their scoring, none more than Metta World Peace. World Peace more than doubled his scoring average with Bryant out of the line-up, but he had only 10 points on 3-of-9 shooting against the Spurs.

Andrew Bynum scored 17 points for the Lakers, while Matt Barnes had 14 and Pau Gasol 11.

The Lakers have little time to transition Bryant back into the system before the postseason, but Parker has been around long enough to expect the best from him.