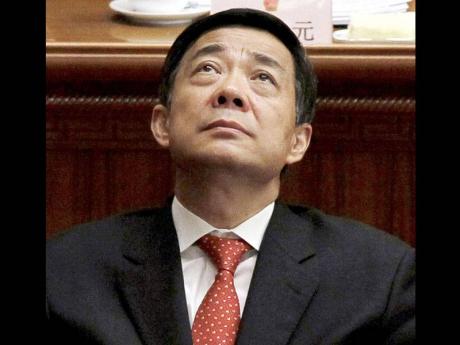 In this March 14 file photo, Bo Xilai, Chongqing party secretary, attends the closing session of the annual National People's Congress in the Great Hall of the People, in Beijing, China. China's leaders want Bo's downfall seen as a blow against corruption - not a power struggle. But now that China's security chief Zhou Yongkang, an even higher-ranking Politburo member, is suspected to be under pressure, it will become difficult to avoid the perception of all-out infighting. - AP

In February, the police boss in the Chinese province of Chongqing entered the local United States consulate. Brandishing a case of documents implicating the provincial party leader in the murder last November of a British businessman, he requested asylum. Washington turned down the request, but not before the White House could arrange to have the policeman whisked off to Beijing, where he'd be out of the clutches of the local party boss.

The party boss, Bo Xilai, is something of a maverick in the Chinese Communist Party, whose leadership prides itself on tight discipline and opacity. He is also a bit of a paradox. A populist who called for a return to the purity of Maoist values, he led a frontal attack on corruption and organised crime. Yet he loved good suits and was not above dabbling in a bit of dodgy business himself.

The popularity of his campaign in a country that is sinking further into corruption gave him a power base from which it was suspected he might one day angle for the top job. As such, he was a growing concern to the leadership in Beijing. What could not have been foreseen was that his wife might murder a British businessman close to the family, and thereby make Bo a national problem.

The businessman in question had long dealings with the Bo family, reportedly even helping their son to get into an elite British school. Just what transpired in the hotel room that night in November is not clear. But it would appear that a business deal went bad, and a party official's wife judged she was above the law.

This kind of thing is not unusual in today's China. But things went too far this time, no doubt because a foreigner was involved. Indeed, the matter was raised by the British prime minister on his recent visit to China.

Bo's enemies in the Beijing hierarchy were no doubt happy for the opportunity to rein him in. However, the victory will prove pyrrhic at best, and possibly a good deal worse than that. Such open divisions in the Chinese Communist Party occur rarely, not more than once in a generation. The last divide of this scale was back in 1989, when the leadership was split over how to respond to the popular occupation of Tiananmen Square.

Bo's fall draws attention to the extent of corruption in the Chinese Communist Party, and reveals to the public just how high it reaches. When China's leaders opted to renounce the Maoist economy for a market-based one, they based their legitimacy on their ability to deliver the goods. Maintaining stability and cohesion during a period of rapid change has provided the justification for their continued rule. As state control of the economy has loosened, its control of daily life has been reinforced.

Therefore, having a conflict break into the open this way undermines the ruling party's legitimacy at a time when popular protest, unleashed by the widening wealth gap the free market has brought, is spreading. One has to read things like body language and silence to discern just what China's top leadership is thinking. But one school of thought has it that political reformers in the party, who would like to loosen political control just as they have done with economic ones, may now gain the upper hand.

The tradition embodied by Bo, of relying on strongmen to clean out the Augean stables when too much muck has accumulated, may be discredited. In its place, the practices of greater transparency and accountability, for which Chinese dissidents have long called, may begin to emerge.

However, in the short term, the party faces an enormous challenge. At the very time it is trying to move the economy from an investment-based to a consumption-based model, something which will itself strengthen ordinary Chinese, the Communist Party must ensure its hold on power is secure. This case will certainly test the Chinese leadership's nimbleness and responsiveness.

CAPTION: In this March 14 file photo, Bo Xilai, Chongqing party secretary, attends the closing session of the annual National People's Congress in the Great Hall of the People, in Beijing, China. China's leaders want Bo's downfall seen as a blow against corruption - not a power struggle. But now that China's security chief Zhou Yongkang, an even higher-ranking Politburo member, is suspected to be under pressure, it will become difficult to avoid the perception of all-out infighting. - AP