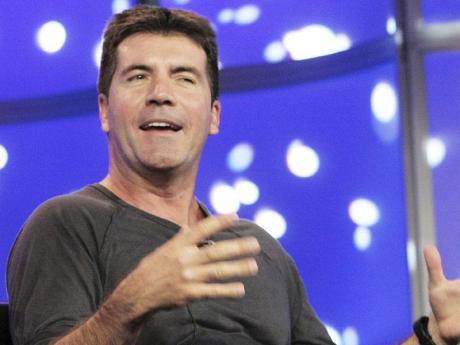 In this January 20, 2007 file photo 'American Idol' judge Simon Cowell speaks during the 2007 Fox Winter Press Tour in Pasadena, California. A revealing new biography offers intimate, some might say too intimate, details about Simon Cowell, along with a portrait of the entertainment mogul's savvy business side. 'Sweet Revenge', published in the US by Ballantine Books on Saturday, April 21, is written by British journalist and biographer Tom Bower and is the first book written about Cowell with his participation, though not his authorisation. - FILE

He gets colonic irrigations, Botox injections and vitamin drips, and insists on black toilet paper in his home.

A revealing new biography offers intimate - some might say too intimate - details about Simon Cowell, along with a portrait of the entertainment mogul's savvy business side.

His latest portrait of power centres on the tanned and brush-cut Cowell, 52, who has gained fame in both Britain and North America as producer and an acerbic judge on TV talent shows including The X Factor and America's Got Talent.

Bower says he became fascinated by the story of a middle-aged music producer who struck gold by turning the old-fashioned talent contest into a slick 21st-century phenomenon - and in the process earned a fortune estimated at 200 million pounds (US$320 million) by the Sunday Times Rich List.

The book paints a picture of a man who struggled for years in the music business, spurred on to success out of a desire to prove his detractors wrong.

"But what he did have was charm and an ability to understand the music business because of all this failure."

Sweet Revenge, published in the United States by Ballantine Books last Tuesday, is billed as the first book about Cowell written with the mogul's participation - though not his authorisation.

Bower spent many hours with Cowell aboard his private jet, at his Los Angeles home and on his yacht in the south of France and the Caribbean.

But he says Cowell told some friends and associates not to talk to him. Writing the book became "a cat and mouse game" between him and his subject.

"He clearly wanted his story told properly, but there are parts he didn't want told and it was up to me to find out about them," Bower said.

Cowell has stressed that the book was not written with his approval, tweeting: "This book is not written by me. It is unauthorised. The writer is Tom Bower."

Cowell can't have enjoyed the revelations in The Sun tabloid, which has been serialising the more salacious bits of Bower's book.

Among the details: Cowell gets regular colonic irrigations because "it's so cleansing - and it makes my eyes shine brighter." He is put on a drip of vitamins and nutrients for a half hour each week.

"He is only interested in women who are uninhibited and uncomplicated," Bower said. "He is not interested in relationships. He's a schoolboy."

He is, however, generous. Bower says Cowell gave his ex-fianceé Mezhgan Hussainy, a makeup artist on American Idol, a US$5 million Beverly Hills house as a parting gift. Most of his exes have refrained from spilling the beans in the media.

While Britain's tabloids have focused on Cowell's sex life, Bower is more interested in the story of money and power, of "business rivalry and the skulduggery."

At the heart of the book is Cowell's feud with fellow svengali and former Spice Girls manager Simon Fuller. The pair fell out over the 2001 British musical talent-show, Pop Idol, progenitor of American Idol. Fuller was listed as creator of the show despite what Cowell said was a verbal agreement to split the credit.

A legal battle between the two men was settled out of court, with Fuller getting the creator credit for Idol - though Bower says he found "overwhelming" evidence that Cowell played a vital role.

Bower said Cowell was "naïve and humiliated by Fuller's dexterity."

"He didn't understand the importance of owning a format," Bower said. "He learnt his lesson."

He said Cowell became "incensed" by the "created by Simon Fuller" credit on Pop Idol and American Idol, and vowed to create his own rival show.

The result was singing competition X Factor, which had its debut in Britain in 2004 and in the United States last fall. Cowell also created Britain's Got Talent and executive produces its US spinoff, America's got Talent.

Cowell's response to the book, published in Britain on Friday, is so far unknown.

Publicist Max Clifford - who says Cowell pays him hundreds of thousands of dollars a year to keep stories out of the press - said he had advised Cowell not to speak to Bower, because it would undo years of carefully protected privacy.

"He knows it was a mistake," Clifford said.

"For Simon, who has protected his privacy and never, ever spoken about his relationships with anybody, to suddenly be quoted about this, that and the other is to me very damaging.

"Having created an image that's been hugely successful, to see him damage it like that is sad and disappointing," Clifford said.

Bower, though, thinks the book's portrait of Cowell is fairly positive.

While Bower has been openly hostile to some of his previous subjects - he called Gordon Brown a ruthless bully and Conrad Black a crook - he has a soft spot for Cowell.

"He doesn't sit on his laurels. That's what's endearing about him. Although he is vain, he is a perfectionist and a professional - and he understands the business better than most."

CAPTION: In this January 20, 2007 file photo 'American Idol' judge Simon Cowell speaks during the 2007 Fox Winter Press Tour in Pasadena, California. A revealing new biography offers intimate, some might say too intimate, details about Simon Cowell, along with a portrait of the entertainment mogul's savvy business side. 'Sweet Revenge', published in the US by Ballantine Books on Saturday, April 21, is written by British journalist and biographer Tom Bower and is the first book written about Cowell with his participation, though not his authorisation. - FILE