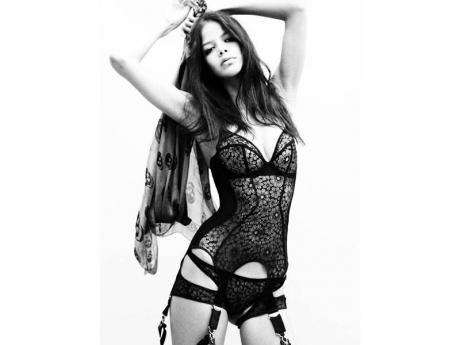 Supermodel Nell makes the switch to designer for Caribbean Fashionweek

The girl who has made a career out of gracing magazine covers and editorials in super sexy bikinis and lingerie, is making a crossover.

Pulse supermodel Nell Robinson, who was declared 'The Body' by Arena magazine, is set to launch her swimsuit line, Bang! at Caribbean Fashionweek (CFW) scheduled for June 7-11 in St Andrew.

Between breaks from a shoot in New York City, Nell proudly declared that she was thrilled to be making advances in the world of fashion beyond being in front of the camera.

"This has been in the making for a while, I have studied fashion and design and I am ready to present a strong collection at CFW," she said

Although not making an exit from international modelling, the expansion of her portfolio to include that of being a designer came naturally for the star model.

"I love the beach and, of course, being Jamaican and having grown up going to Lime Cay on weekends inspired my desire to create a swimwear line." However, according to the new kid on the designer block, the collection will not only be about sea, sun and sand. Fashion fans can expect an infusion of some pop rock influences as well. But, denim and studs for beach? The aspiring designer is quick to point out that there will be a distinct versatility about the pieces which consumers will love.

Robinson, who splits her time between London and New York, has already made inroads with key retailers in advance of the collection's presentation. Both herself and business partner Ann Marie Clarke are keen on seeing the brand come to life.

"We have done a lot of groundwork in preparation for the roll-out. We have approached all the major London high-street shops which we want to carry the line and the response has been great so far," said Clarke.

Although excited to speak of the new business venture, Clarke is, at the same time, guarded about one particular British retail store with a very keen interest in coming on board as a stockist. Having been in the business as a junior buyer, Clarke herself knows all too well that retaining that coveted floor space in retail outlets requires a great deal of creative energy and sustained sense of consumer trends which will keep shoppers coming back.

It appears, however, that this young duo has done its homework and is ready for the opportunities that lie ahead.

And according to Pulse's fashion director, Romae Gordon, "CFW is a great platform for Nell to make that bold first step into the design spotlight. We have always been keen advocates for talent development at Pulse, not only in modelling but also in fashion, and we've welcomed new designers onto the runways of Fashionweek since its inception. Of course, being agents for Nell and seeing her growth into this new creative space is doubly pleasing," said Gordon.

Robinson will join a record number of new designers coming from California, Miami, New York, London, as well as Barbados, Belize and Trinidad, at CFW this year. Emerging designers from Jamaican shores, including the top three of the designer reality TV series, 'Mission Catwalk' will also be presenting collections.

Caribbean Fashionweek is the region's marquee fashion and lifestyle event and is sponsored by Caribbean Export development Agency, Jamaica Tourist Board, Supreme Ventures, the Spanish Court Hotel, SHE Caribbean, The Courtleigh Hotel, Oceanstyle magazine, and CVM TV. Several other sponsors are still to be announced.