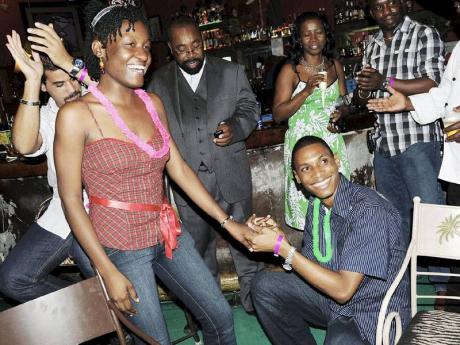 Trecel Messam (left) is obviously overjoyed at the proposal by Howard Johnson at the Diamonds are Forever New Year's Eve party at Coral Cliff Rum Jungle in Montego Bay. - Photo by Sheena Gayle 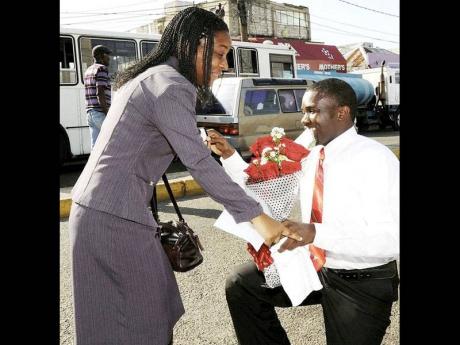 One of the most memorable public proposals in Jamaica. In 2009, Olondo Lawrence got down on his knee in the middle of Cross Roads and popped the question to Stacy-Lee Cole. - FILE
1
2

In an age where it is still the norm for the man in the relationship to pop the question, most put a lot of thought into the planning.

Like the wedding day, it's meant to be memorable and some men go to great lengths to make sure that at the perfectly choreographed moment, everything happens in tune. But should such an intimate moment be done in the realm of the public or be kept a private affair?

A recent article on BBC highlights some of the most outrageous ways in which people 'pop' the question. From doing it at a sporting event (baseball and basketball) to flashmobs and having a choir.

DM wanted his proposal to be special and something his girlfriend would never forget. Last August, he popped the question to her on the skylift at Mystic Mountain in Ocho Rios.

SH was proposed to in the company of her husband's brother and his wife.

But RL was pleasantly surprised when her boyfriend proposed to her in a restaurant on her birthday. "We were at a Moroccan restaurant for my birthday. It was beautiful, very old-fashioned. He did the whole kneeling on one knee thing. Everyone was looking. My friends were there and they all cheered; it was so overwhelming. Everyone (my friends) knew he was going to propose but not me. The ring came in a glass of wine."

While that was fine for RL, CC notes that's not for her. "Maybe with my family around, but I wouldn't want a public proposal. It's a private affair and I like the idea of it being private. I think those who do it publicly are very brave but its there call so I don't have an issue with it, it's just not for me."

The BBC story quoted consultant psychologist Glenn Wilson, who notes that public wedding proposals can sometimes be a ploy.

"It's possible that some men think that this will pile pressure upon her and increase the likelihood of getting a positive response, that she must think that he really loves her if he goes to this extent of trouble and trickery."

However, YouTube is loaded with public proposals that went wrong. Many Jamaican men share that sentiment, for KB, a public display is totally out of the question. "Suppose she shame me?"

While AB was sure that his long-time girlfriend would accept his public proposal, he got a little more than he bargained for out of his big plan.

He notes that the hardest part of his grand plan was arranging the dinner with her parents to ask their permission before he popped the question. "It took about a week to get together and the hardest part was doing it without her finding out," he recalls.

On the big day, there were certain logistics that had to be worked out that required the help of his church brothers. One was assigned to pick up the flowers and deliver it to the Courtleigh hotel where they would be having dinner. Prior to this he had a meeting with the maitre'd.

He popped the question when the bouquet was delivered. "Lucky for me, she said yes. I thought she would shed a tear and shyly say yes, what I didn't expect were the waiters looking on and the big clapping. He noted that that was what drew the attention of the other diners. "You just felt the piercing eyes and your new name, 'they just got engaged'." Though she said yes, he notes that she was very embarrassed with all the clapping, so they quickly had a change of venue.

While NP has no problem with a public proposal, taking that route will depend on his partner. "If she is easily embarrassed then definitely private."

But if you choose this route here are some pointers to keep in mind.

(1) Make sure you and your partner is comfortable with all the attention.

(2) Make sure her answer will be yes. There have been some public refusal and its not pretty.

(3) Make sure whatever it is you have planned will not embarrass your partner or persons watching.

(4) Person's will be going about their business so try not to be too loud and obstructive.

(5) You don't have to go over the top with an extravagant engagement. Nothing is wrong with a quiet intimate proposal.