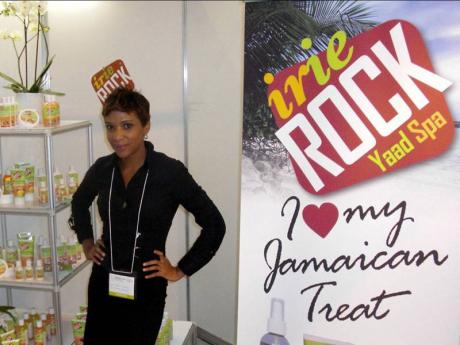 Alison Sinclair - Sinclair's Ceramics; jewellers Bianca Bartley - Peace-Is of Bianca and Kristina Broderick - Kristina Broderick Jewellery, and Racquell Brown - Irie Rock, a natural line of skincare and spa products, were among the nine women from the Commonwealth who benefited from full sponsorship from the Commonwealth Secretariat to participate in Spring Fair International in the United Kingdom in February.

They made the final cut from a field that included 60 companies from 12 Commonwealth countries. JAMPRO, the national investment and export promotion agency, with support from the Ministry of Foreign Affairs and Foreign Trade and the Jamaica Exporters' Association (JEA), facilitated the applications of the local companies.

The companies were collectively sponsored to the tune of £34,000 (J$4.5 million) and had the opportunity to market their products to global buyers at one of Europe's largest buyers' fairs, which was held at the NEC Exhibition Centre in Birmingham.

Racquell Brown indicated that the event provided her Irie Rock line of products with significant exposure to international buyers, and she was also able to make on-the-spot sales. Brown noted that her company was actively following up on several expressions of interest, with a view to converting them into solid business partnerships. Kristina Broderick expressed similar sentiments, while describing her participation as a useful learning experience.

"The event was a great experience ... I made great contacts, got good exposure and have some very interested potential customers that I am currently following up with," said Broderick.

Based on the selection criteria developed by the Commonwealth Secretariat, the products of the Jamaican applicants scored highly in critical areas such as international appeal and quality, functionality, value for money, scalability and the potential to employ labour-intensive processes in the manufacturing sector.