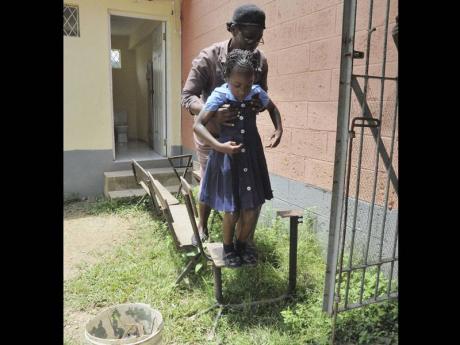 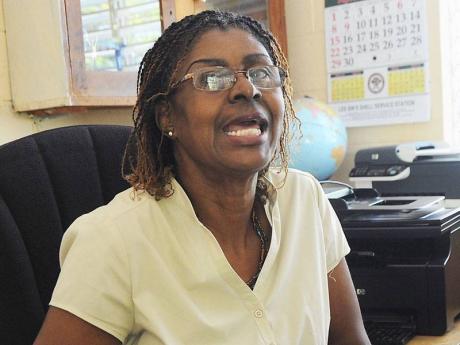 Gordon - We have had a long-standing concern in terms of the safety of the children, and I am definitely afraid each time a child has to cross one of those benches. 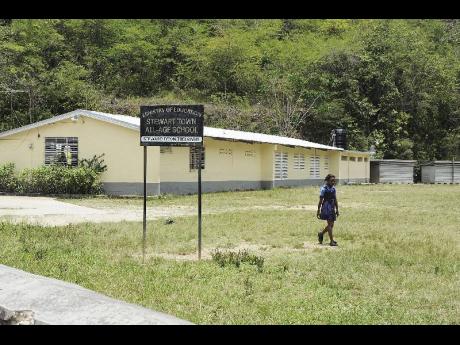 WHENEVER IT rains, students at the Stewart Town Primary School are forced to run through the downpour in order to access the bathroom. To make matters worse, the water forms a pool at the door.

"It is really hazardous for them - having to make their way through the water," principal, Beverley Gordon, told The Gleaner.

"What has been happening is that we have to lift the students across desks to get them to use the bathroom. Also, there is no overhead protection for them in order to use the bathroom. When it is raining heavily, they need some kind of shelter to prevent them from getting wet," Gordon said.

It has not always been like this. But four years ago when a new bathroom block was constructed, it was built in a water course. Water rushing off a nearby hillside no longer has anywhere to run, and it backs up at the doors to the bathrooms. It's a nightmare for staff and students.

"We have had a long-standing concern in terms of the safety of the children, and I am definitely afraid each time a child has to cross one of those benches," the principal told The Gleaner.

But that is not the extent of the problem. The school's canteen is listed for improvement under the Government's jobs initiative - the Jamaica Emergency Employment Programme, better known as JEEP.

"We are in dire need of running water in the kitchen. We need a new kitchen sink and we need new cupboards to house the utensils," the principal said.

The kitchen is being used to facilitate the Programme of Advancement Through Heath and Education (PATH), under which meals are provided to the neediest students. Of the 134 students enrolled, 68 are on PATH, and the principal says meals are often provided for 75 students.

The principal, while hopeful that the project will be implemented, has promised that the school will take care of the facilities.

"Whatever we are given at the school, we ensure that it is properly maintained," she said.

In the meantime, Maxine Codner, president of the school's parent-teacher association (PTA), said she wants the best for the school and can't wait for JEEP to roll on to its grounds.

She said the school needs to be fenced and also needs a playing field, which would keep the students away from the nearby cemetery.

For now, Codner said the PTA would settle with the proposed JEEP projects. She has also expressed confidence that they would be delivered.

"If it's a JEEP project, it will happen. Mi confident with the JEEP," she said.

Lucille Brodber, executive director of JEEP, told The Gleaner that a timeline for the project had not yet been determined. Brodber said the Stewart Town project represented a rescoped proposal of the Jamaica Development Infrastructure Programme.

JEEP is intended to create short-term employment for Jamaicans. The Gleaner will be watching JEEP in Stewart Town, as well as other projects, to see whether the deliverables under the programme are being met and if taxpayers are getting value for money.

NUMBER OF PEOPLE TO BE EMPLOYED: Unknown

CONTRACTOR: Not yet been identified