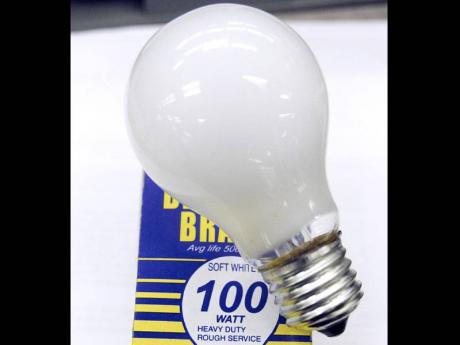 The following question was asked recently by a concerned citizen.

How many litres of oil would be needed to run a 100-watt electric bulb consistently for one year? Similarly, how many kg of coal to accomplish the same thing?

On the surface of it, the answer could be calculated by any reasonably smart high-school physics student. We suspect however, given the source of the question, what was being sought was a deeper, more fundamental answer that goes to the core of the energy crisis that Jamaica now faces.

So, first, here's the easy part. A barrel of oil, often referred to as barrel of oil equivalent (BOE) contains approximately 1.7 MWh of energy. Generation plants in the current JPS system extract approximately 35 per cent of the energy content of a barrel of oil (measured by the average heat rate) and convert it into electricity.

Transmission and distribution losses take away another 23 per cent of this energy before it gets to the customer's premises. The light bulb ends up receiving 27 per cent (0.46 MWh) of the energy from the barrel of oil. Burning a 100W incandescent bulb for 24 hours a day and 365 days a year (not advisable) requires 876 KWh of energy (roughly equivalent to half-barrel of oil).

Incidentally, the typical 100W incandescent bulb is very inefficient, converting less than 20 per cent of the energy consumed into visible light, the rest being dissipated as heat so that the amount of useful energy consumed from the barrel of oil in this scenario is really only five per cent.

Nevertheless, the initial answer to our question is that given the current inefficiencies in the electricity production and distribution system, it requires just about two barrels of oil to keep the light bulb burning continuously for a year.

This calculation holds whether the fuel source is oil, gas or coal. It will take 396 kg of coal and 333 litres of LNG to keep the light bulb burning for one year.

Using nominal trading prices for each fuel type indicates the relative costs. So, hypothetically speaking, all other things being equal (of course they're not but the simplification suits the exercise), using LNG instead of oil would cost roughly half the amount to burn the light bulb, and using coal would be about 1/7th the cost.

The earlier analysis indicates that regardless of fuel, the Jamaican electricity production and distribution system only delivers approximately 27 per cent of the fuel purchased to the end consumer.

Consumers with poor energy conservation practices such as continuously burning incandescent bulbs, or inefficient building air-conditioning systems, contribute further to this energy waste. Jamaica's oil bill in 2010 was 122 per cent of all export earnings.

A significant percentage of this oil bill is used to produce electricity and, on average, we waste 73 per cent of this costly commodity in delivering electricity to consumers.

What is even more perverse about this situation is the well-known fuel pass-through clause in the electricity tariff structure that requires the consumer to pay for the cost of fuel, regardless of how inefficient the procurement or conversion processes become. Is there a better way? Is there a model of electricity production and delivery that can begin to seriously impact on this seemingly perpetual, but clearly unsustainable situation.

While the predominant local energy debates about LNG versus coal, and fuel diversity, are important issues; getting Jamaican industry to a competitive 10-15 US cents/KWh will require a more fundamental conversation about the structure of the industry and the way that usable energy is extracted from a barrel of oil or a tonne of coal.

We believe that there is a different industry model that could potentially suit small island states like Jamaica.

A model that takes advantage of new- generation technologies and more efficient industrial structures capable of delivering electricity at lower cost. A model that can extract more usable energy from the barrel of oil, the litre of LNG or the kg of coal to burn the light bulb while running the air conditioning and the water heater.

We believe such a model of electricity sector reform could potentially impact many of the prevailing issues and concerns currently being contemplated, such as:

Space doesn't permit a more detailed examination of this conceptual model in this article. Suffice to say that it will require a deep commitment to the national interest and the willing participation of all stakeholders in the electricity sector, including the JPS, the OUR and GOJ, the local private sector, academia and consumers.

All have a role to play in helping to return sanity to a very troubled sector. We will complete the presentation and examination of this conceptual model in subsequent papers.

Contributed by the Energy Think Tank, University of the West Indies, Mona