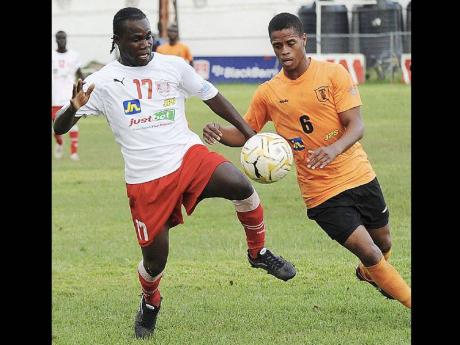 "We are giving it an honest effort all the way until the end of the season and wherever it leaves us so be it," said Andrew Price, coach of Boys' Town, who, with the win and two games to go, moved to 60 points - six less than Portmore, who can seal the title with a draw against Humble Lion in the night game at Ferdie Neita Park, at 9 o'clock later.

It wasn't a vintage start in west Kingston yesterday as soft underfoot conditions, caused by heavy rains, led to a rather forgettable opening 10 minutes or so.

Things, however, began to pick up soon afterwards, as the home side started to turn the screws on their neighbours.

Roland Dean was denied by brave and decisive goalkeeping from Kirk Porter, who left his line convincingly to snuff out his opportunity. Porter was called upon four minutes later as a 25-yard free kick from Keithy Simpson was expertly plucked from the 'pigeon hole' by the experienced goaltender.

In a game that had more at stake for them, Boys' Town soon began to show more interest in the contest and were soon rewarded.

With 26 minutes on the clock, midfielder Richard Clarke slid just in front of Tivoli goalkeeper Edsel Scott to meet a teasing cross from Daemon Benjamin, turning the ball into the goal and giving his team a deserved lead.

Boys' Town continued to apply the pressure and almost doubled their advantage a few minutes later.

"Di man dem nah play wid dem heart, mek we play wid we heart, we nuh out yah so fi deh out yah so sake," the defender charged during a break in play.

Despite the encouragement, it was the visitors who continued to chip away at the 2011 champions' resolve.

Mikhail Howell should have doubled Boys' Town's lead in the 33rd minute but he could not keep his shot under control. Howell, squandered yet another opportunity two minutes later, when a well-served cross from Virgo met him at the back post with just the goal as his company.

There were no regrets, however, for the 'Red Brigade' as substitute Marvin Stewart saw his grass-cutting shot make its way through a crowd of players and beyond the outstretched arms of Scott in the 81st minute to double his team's lead.

Tivoli Gardens made it interesting, as second-half entrant Paul Garricks finished a nice link-up play at the top of the box to cut the deficit, but it was too little too late for the hosts.

Clarke later saw red after picking up a second yellow.

"Today, we used quite a few of our youngsters as we begin to look to the future," said Tivoli's assistant coach, Alvin Shaw. "We are going to be professional and give it our all until the end of the season."