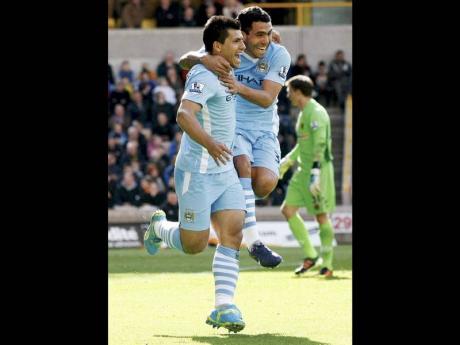 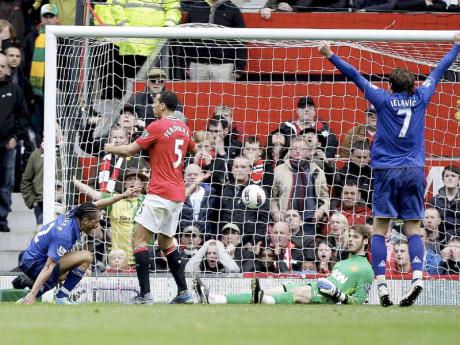 Manchester City made the most of Manchester United dropping points against Everton yesterday to move within three points of the English Premier League leaders by beating Wolverhampton Wanderers.

Everton twice came from two goals behind in an extraordinary 4-4 draw away to United at Old Trafford.

City, who knew United's result before they kicked off, then won 2-0 against Wolves to relegate the Black Country club and revive their bid for a first English title in 44 years.

That win saw them move to within three points of United ahead of the Manchester derby at City's Eastlands ground a week on Monday, where victory for the hosts will see them replace the champions at the top on goal difference with two matches left.

Argentina forward Sergio Aguero's 27th minute opener put City ahead at Molineux, before Samir Nasri's goal 16 minutes from time made the game safe for the visitors as Wolves, who had to win to stay up, were relegated with three games left to play.

Everton were 4-2 down with seven minutes of normal time left and Manchester United manager Sir Alex Ferguson told Sky Sports afterwards: "We've thrown it (this match), away, absolutely given it away."

Looking ahead to the derby, Ferguson said: "We've given them (City) the initiative. It makes the game at the Etihad Stadium more important - it's the decider really."

Ferguson, who acknowledged the City game would 'definitely' be the biggest derby of his long United career, added: "We need to get a result now at the Etihad and there's no reason we can't do that. There's been the expectancy from City that it could be their decider - it's our decider too."

Everton, who last won at Old Trafford 20 years ago, took a 33rd-minute lead when Nikica Jelavic headed in Tony Hibbert's cross as the visitors looked to bounce back from their FA Cup semi-final defeat by cross-town rivals Liverpool.

But United were level before the break when Wayne Rooney, against his former club, powered in a header from Nani's cross.

Everton, however, would not lie down and Marouane Fellaini's first time shot from Hibbert's cross cut United's lead to 3-2.

But when Welbeck teed up Rooney for the England striker's second goal in the 69th minute, it appeared United had wrapped up all three points.

Indeed, United might have gone 5-2 in front only for Patrice Evra's close-range header to come back off the post.

But Everton fought back with Jelavic scoring his second before, five minutes from normal time, South Africa's Steven Pienaar swept in Fellaini's cross to make it a scarcely credible 4-4.

United almost won the match in the fifth and final minute of stoppage time, but Howard saved from Rio Ferdinand.

Everton manager David Moyes was delighted by the way his side responded to their FA Cup semi-final defeat.

"It was absolutely brilliant, the effort they put in," he said. "We came here to win the game because we've felt hard done by lately and the players didn't half put a show on today."