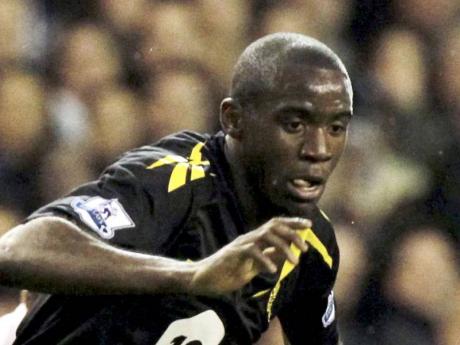 English soccer player Fabrice Muamba calls his recovery "more than a miracle'' in his first interview since going into cardiac arrest during a match. He still doesn't know if he will play again.

The Bolton midfielder's heart stopped beating during last month's FA Cup match at Tottenham, but he was able to walk out of the hospital earlier this week and return home.

''For 78 minutes I was dead and, even if I lived, was expected to have suffered brain damage,'' Muamba told yesterday's edition of The Sun newspaper. ''But I'm very much alive and sitting here talking now. Someone up there was watching over me.''

The 24-year-old Muamba collapsed on the field 41 minutes into the match at White Hart Lane.

''I felt very slightly dizzy. It wasn't normal dizziness - it was a kind of surreal feeling, like I was running along inside someone else's body,'' Muamba said. ''I had no pain whatsoever. No clutching at my chest or tightness like you see when people have heart attacks in movies. Just an odd feeling that's impossible to explain. Then I started to see double. It was almost like a dream.

''I could see Spurs players running around in the distance and saw two Scott Parkers and two Luka Modrics. That was when I realised something was seriously wrong.''

Muamba praised Andrew Deaner, the cardiologist who left his seat at the match to help medics treat the player.

''He is the reason I have been able to hold my baby son again and continue my life,'' said Muamba, who is recovering at home with his three-year-old son Joshua and fianceé after being discharged from the hospital last week Monday - just over a month after he suffered the cardiac arrest on March 17.

''It would be great to play football again and I hope that will happen,'' Muamba said. ''But it's even greater just to live life and love my family. I'm a lucky man.''